Google, in its Search Trends report for the Fifa World Cup 2014 group-stage, has revealed some interesting statistics about the most searched players, managers, teams, and moments - from goals to celebrations.

The search giant said the World Cup group stage was "marked by some remarkable performances, upsetting exits, referee gaffes, miscellaneous actions and repeated history, the tournament saw some great teams and names collapse." It added that the "group stage also witnessed the emergence of new names who are basking in the spotlight."

First up in the list, as Colombia cruised into the quarter final, James Rodriguez became the most searched player on the planet. Rodriguez now has a tournament-leading five goals in Brazil and further enhanced his status as perhaps the World Cup's biggest revelation.

Interestingly the most searched teams during the World Cup group stage including England, Portugal, Mexico and Italy are already out of the contest with Brazil as the only exception leading from the top.

As for goals, Robin Van Persie's 'flying goal' topped the search charts during the group stage as fans relived the moment on the Internet. Messi's 'first goal' was the second most popular search term after the Argentine scored a superb solo goal as his team beat Bosnia 2-1. Another very popular search term was 'Dempsey's fastest goal', after the American player scored in the first 30 seconds against Ghana.

Coming to other moments, such as celebrations, England's Daniel Sturridge celebration after his goal against Italy during their 2014 World Cup Group D match gained huge interest from fans online. England's physio Gary Lewin had injured himself during the course of the celebration.

Cristiano Ronaldo topped traditional Google search results despite his team getting knocked out in the early stages. There was a lot of interest in the Portuguese 2013 Ballon d'Or winner due to injury woes and his hairstyle changing on a daily basis.

As both England and Italy exit from World Cup, England's opening encounter against Italy remained the most searched battle in the group stages. The USA vs Ghana match in Group G and Group A battle between Brazil and Mexico was also quite popular among fans online.

Brazilian Coach Luiz Felipe Scolari remained the favourite among the online audience drawing the most number of searches for any team manager.

Google reveals that fan interest for Fifa World Cup is not just limited to the on ground action, with searches around players "Hair style" to their "girlfriends/wives" some of the most popular during the group stage.

(Also Read: How to Follow World Cup Beyond Live Video) 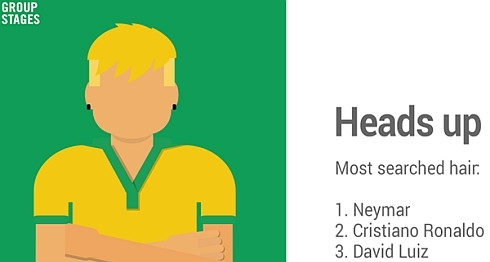 Match Referee Yuichi Nishimura remained the most searched referee in the group stages grabbing lots of headlines for his controversial decisions in the opening match of the tournament.

Google also revealed the most searched for celebrities during the World Cup group stage, which were Shakira, Jennifer Lopez, and Pitbull.