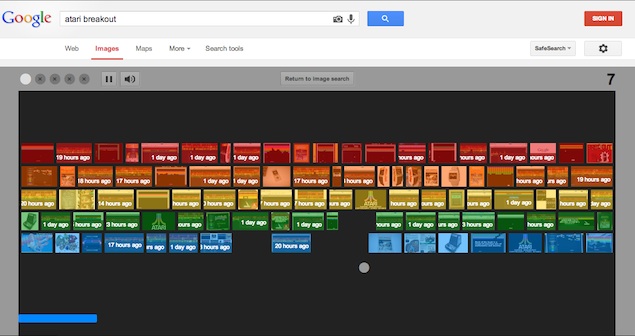 Google is celebrating the 37th anniversary of the classic Atari game, Breakout, with an easter egg that lets users play the actual game when they search for 'Atari Breakout' on Google Image search.

After entering the search terms and hitting the enter key, you'll see that the search result thumbnails converge with an animated effect to form brick walls that have to demolished with a ball and a movable paddle. The gameplay is pretty simple and you can control the paddle with either the mouse/ trackpad or keyboard arrow keys. The game features play and pause controls and even sound effects. You get five chances and can share your score as well. We have to say that the game is quite addictive and one of the best Google easter eggs.

The arcade game, Breakout was developed by Atari and launched in April 1976.The game was designed by Nolan Bushnell and Steve Bristow, and was based on Atari's 1972 arcade game Pong. It was also adapted for video game consoles and several new games based on it were developed later, including Super Breakout.

The development of the game also has its share of history. The responsibility of designing a prototype of the game was assigned to Apple co-founder Steve Jobs who further asked his friend and business partner Steve Wozniak to design the game promising to split the assignment fee of $750. Wozniak completed the assignment in four days and got $375 as part of the fee. Jobs received a bonus for completing the game in time but did not share it with Wozniak. However, Wozniak's design was never used as Atari said that it was not feasible. Though Wozniak claims that the game play resembled his design.
Comments