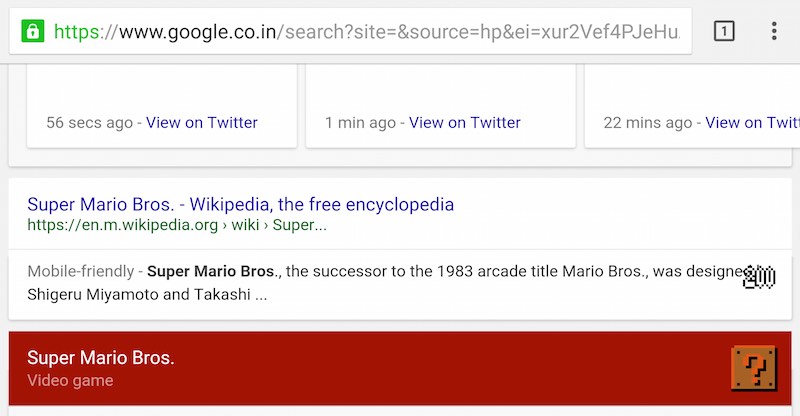 Google tends to throw in Easter eggs that tie-in to real life events such as decking up the logo on its home page for the Olympics. Monday however, the Mountain View-based company decided to pay homage to the Super Mario Bros. to celebrate the 30th anniversary of the classic video game.

Searching for 'Super Mario Bros', 'Super Mario', or even 'Mario Bros' results in a block with a question mark shown off on the search screen. Depending on the device you're on, if you click or tap it, it will result in hearing the classic 'ding' sound when you collect a coin in the game. Regardless of how often you click, it will be the only sound you hear so old-timers looking for power-ups will have to make do with playing the game instead.

The character had earlier made an appearance in the Nintendo arcade game "Donkey Kong", but under the name Jumpman. With his distinctive uniform and moustache, the hyperactive little plumber is instantly recognisable, a rare quality in the games market.

To mark the three-decade milestone, Nintendo last Thursday released in Japan "Super Mario Maker" on the Wii U console. This allows players to create their own worlds for Mario, or use those created by other players and shared through the Internet. In the run up to which, series creator, Shigeru Miyamoto featured in a video that answered a host of fan theories including if the revered classic, Super Mario Bros. 3 was a play, and the origins of the video game hero's name.