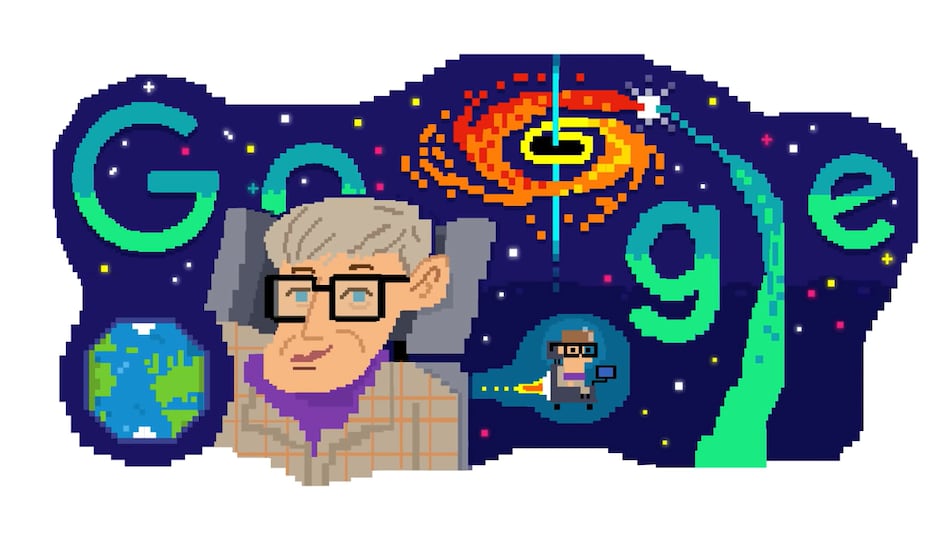 Stephen Hawking's 80th birthday is being celebrated by Google with a special animated Doodle. It features a two-and-a-half-minute-long video in the physicist's own computer-generated voice which depicts his contributions to the universe and illustrates the battle of life with his affected health condition — neurodegenerative disease. With his well-known views of black holes and the Big Bang, Stephen Hawking is the most recognisable scientist of our age and has an iconic status. Apart from his contributions to modern physics, his best-selling books made the field widely accessible to millions of readers across the globe.

Google has created a new Doodle to honour the English cosmologist and has shared a glimpse of his journey through a dedicated post. Clicking on the Doddle will bring users to the post. Stephen William Hawking was born in 1942 in Oxford, England. The video further shows how probed the greatest mysteries of the cosmos despite being diagnosed with a neurodegenerative disease at the age of 21.

In 1965, Hawking defended his doctoral thesis at the University of Cambridge, “Properties of Expanding Universes,” which presented the revolutionary theory that space and time originated from a singularity, a point both infinitely small and dense, best known today as the key characteristic of black holes. Hawking then started his career as a research fellow at Cambridge's Gonville and Caius College.

Hawking in 1974 discovered that particles could escape black holes. This theory, dubbed Hawking radiation, is considered as his most important contribution to physics. In 1979, Hawking's work on black holes prompted Cambridge to appoint him as the Lucasian Professor of Mathematics, a position held by Isaac Newton in 1669. Hawking's doctoral thesis was released to the public in 2017 on a University of Cambridge website, which crashed due to enormous amounts of traffic. He died at the age of 76 in 2018.

The Google Doodle was illustrated by artist Matthew Cruickshank, and the tech giant has confirmed that the voice of Stephen Hawking was generated and used in the Doodle with the approval of the Hawking estate.