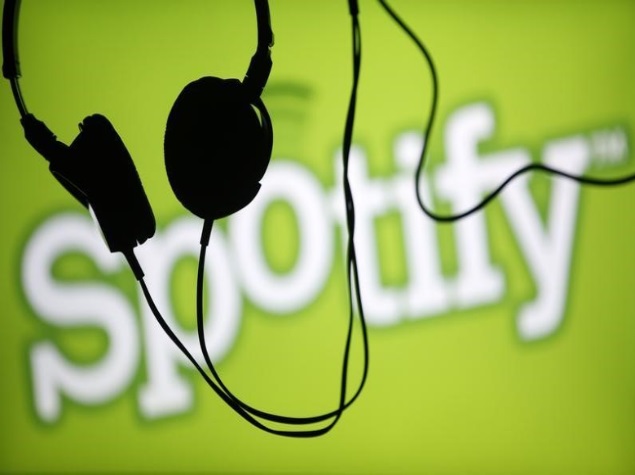 Spotify said Wednesday it had 75 million users worldwide, of which 20 million are paying subscribers while the rest receive the advertising-financed free service. In the meanwhile, Nordic telecom operator TeliaSonera said Wednesday it had bought a 1.4 percent stake in music streamer Spotify, valuing the online music service at more than $8.2 billion (roughly Rs. 52,291 crores) .

The firm has yet to comment on Apple's announcement earlier this week that it was launching a music streaming service expected to rival Spotify.

Spotify is available in 58 countries, while Apple Music will be launched at the end of June in over 100 countries for owners of Apple devices. By autumn, it will also be available for Android, the rival operating system by Google.

The Swedish company announced in May it would expand its services to include videos, podcasts and other content, some of which is exclusively on Spotify.

"TeliaSonera is investing $115 million (roughly Rs. 733 crores) for a 1.4 percent stake in Spotify," TeliaSonera said in a statement on Wednesday.

The Wall Street Journal quoted a source close to the matter as saying that the investment was part of a $526-million (roughly Rs. 3,354 crores) fundraising round, allowing the company to top $1 billion (roughly Rs. 6,377 crores) collected since its creation in 2008.

The New York-based daily identified the investors as American, British and Canadian funds, including one controlled by US investment bank Goldman Sachs, and Abu Dhabi's sovereign wealth fund.

Among the investors, TeliaSonera is the first to reveal publicly the size of its stake in Spotify, a pioneer of online music streaming started by Swedes.

"Both companies are also committing resources, staff and other assets to ignite the joint innovation agenda within areas such as media distribution, customer insights, data analytics and advertising," TeliaSonera added.

The Luxembourg holding company Spotify Technologies registered turnover of EUR 1.08 billion in 2014, but the company has not recorded a profit since its start.