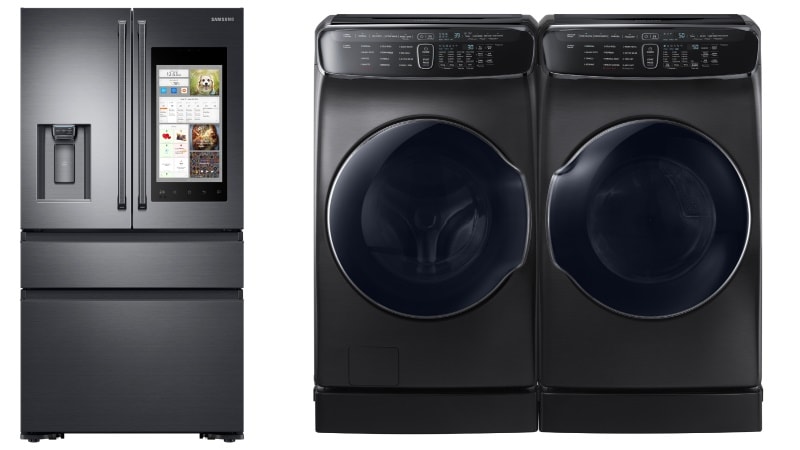 At CES 2017 that kicked off this week, technology giant Samsung expanded the portfolio of its refrigerators, washing machine+dryers and other kitchen appliances with the launch of new products. Starting with the Family Hub 2.0 refrigerators, the new Internet-connected devices from Samsung sport upgrades over the previous Family Hub 1.0 with new features like View Inside Cameras, improved shopping list, grocery buying via MasterCard and Recipe browsing among others. The new and improved View Inside Cameras can detect the food items kept inside the refrigerator that need to be replenished along with their images. The Recipes app, powered by AllRecipes, will show enlarged text on the screen and read the recipes aloud.

With the Family Hub 2.0 platform, family members can create their individual profiles on refrigerators and synchronise them, while also allowing them to use their profile picture/ avatars. The 21.5-inch display packed on the door will work as a digital bulletin board where users can handwrite seamlessly. You can also dictate commands to the refrigerator to read weather and time, or to add some item to the shopping list.

Samsung has also collaborated with partners like Grubhub, Nomiku, Glympse, Ring, Spotify, and iHeartRadio for other home entertainment, security services. Samsung's Family Hub 2.0 will be pushed out across a full range of 3-Door and 4-Door French Door refrigerator models as well as the existing 4-Door Flex lineup.

Talking about the home appliances, Samsung has also introduced its new smart built-in cooking line at CES 2017. The new product lineup includes various models of built-in Double and Single Wall Ovens, built-in Gas Cooktops, built-in Induction Cooktops, built-in Electric Cooktops, and built-in Range Hoods. Samsung has equipped all its built-in appliances with Wi-Fi connectivity, so the users can remotely start, control and turn off their ovens, as well as monitor their cooktop and range hood from their smartphones. In addition to it, Bluetooth connectivity syncs the cooktop with Samsung's Range Hood that can automatically start the hood's fans or lights when using the cooktop.

Finally, Samsung's new four-in-one washer+dryer saves the day with its five cubic feet of laundry capacity and a second one-cubic foot washer on top, allowing you to do two loads at once. Named the FlexWash + FlexDry laundry system, Samsung boasts of its the Delicate Rack dryer zone, which automatically adjusts the dryer temperature based on the clothe fabric, while still drying clothes in the primary dryer. Obviously, as a part of its connected devices, Samsung's washer+dryer can be controlled via the Samsung SmartHome app that allows remote operations when you aren't home.