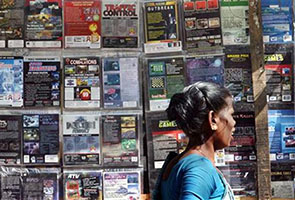 Highlights
The United States on Monday again put Russia and China on its annual list of countries with the worst records of preventing the theft of copyrighted material and other intellectual property (IP), the U.S. Trade Representative's office said.

Argentina, Canada and India were also put on the "priority watch list," along with Algeria, Chile, Indonesia, Israel, Pakistan, Thailand, Ukraine and Venezuela.

"This year's Special 301 Report is more significant than ever in light of recent U.S. Government data showing that IP-intensive industries support as many as 40 million American jobs and up to 60 percent of U.S. exports," U.S. Trade Representative Ron Kirk said in a statement.

Canada, among the North American Free Trade Agreement nations along with Mexico and the United States, made the list for the fourth consecutive year, partly for failing to reform its copyright laws.

The priority watch list carries no threat of sanctions, but hopes to shame governments into cracking down on piracy and counterfeiting and updating their copyright laws.

It was Russia's 16th straight year on the list, according to a tally kept by the International Intellectual Property Alliance, a U.S. business group.

China has been on the priority watch list for eight years and subject to a special monitoring program under Section 306 of U.S. trade law since the late 1990s.

USTR placed Ukraine on the priority watch list for the first time since 2007.

Ukraine has made "minimal progress" in implementing a 2010 action plan to reduce piracy and counterfeiting and "in some cases took steps backward," USTR said.

Kirk congratulated Malaysia and Spain for being removed from a lower level watch list that includes 27 countries this year.

Malaysia was dropped from the watch list in recognition of steps it has taken to strengthen protection and enforcement of intellectual property rights and for issuing regulations to protect pharmaceutical test data, USTR said.

Spain was removed from the watch list after adopting regulations to combat piracy over the Internet, USTR said.

USTR said Canada's place on the priority watch list was "subject to review" if Ottawa enacts long-awaited copyright legislation. The report urged Canada to take stronger action to fight piracy over the Internet and to give its customs officials increased authority to seize counterfeit goods at the border.