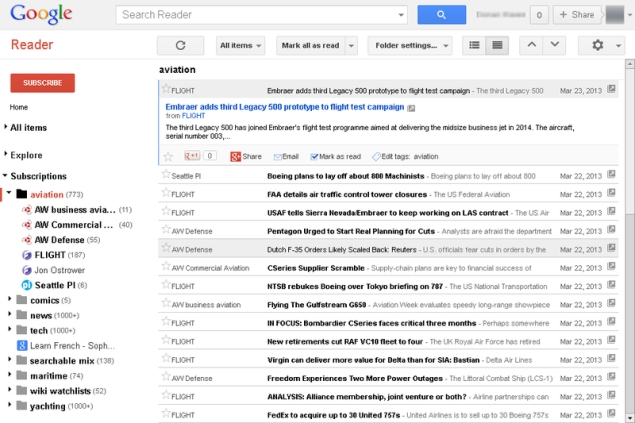 Google on Monday closed the book on its free Reader service for gathering news stories and other online items in simple, up-to-the-minute lists.

Reader's "RSS feeds" had long been a popular way to stay updated on subjects of interest, but users are increasingly turning to social media such as Facebook and Twitter instead.

"Most content now is tied to some dedicated platform or other," said Silicon Valley analyst Rob Enderle of Enderle Group.

"Getting rid of this service shows good governance by Google. In a world of limited resources, this service just wasn't making the grade."

A 'Keep Google Reader Running' petition online at change.org had nearly 154,000 signatures as of Monday. A 'Please Don't Kill Google Reader' petition at the same website had logged 7,598 supporters.

"This is about us using your product because we love it, because it makes our lives better, and because we trust you not to nuke it," read the first petition, started by a New York City man. "So, please don't destroy that trust."

Google was not deterred, and visitors to Reader on Monday were greeted with a message reminding them that the service would cease to exist at the end of the day.

Online services such as Feedly, Digg Reader, Newsblur and even Flipboard have stepped up as alternatives for Google Reader, which made its debut in October 2005.

"We want everyone's migration from Google Reader to Feedly to be perfect," Feedly which has won top marks as an alternative to Google Reader said in a blog post Sunday.

"Google touches millions upon millions of people," Enderle said. "So, even if a small fraction is upset it could be in the hundreds of thousands."

The demise of Reader was among hot topics on Twitter Monday, with many of the one-to-many messages focused on advice about switching to rival services.

Ironically, it was Twitter that helped make Reader obsolete by letting people get rapid-fire updates from anyone in real-time on desktop or mobile devices instead of needing to check RSS feeds in Web browsing software.

But serious concern has been raised by users in the Middle East, who note that Reader is used in places such as Iran to sidestep Internet censorship by oppressive regimes.

Reader feeds are on Google servers, meaning that censors might have to block access to nearly all of the Internet company's websites to stop people from accessing aggregated updates from online outlets.