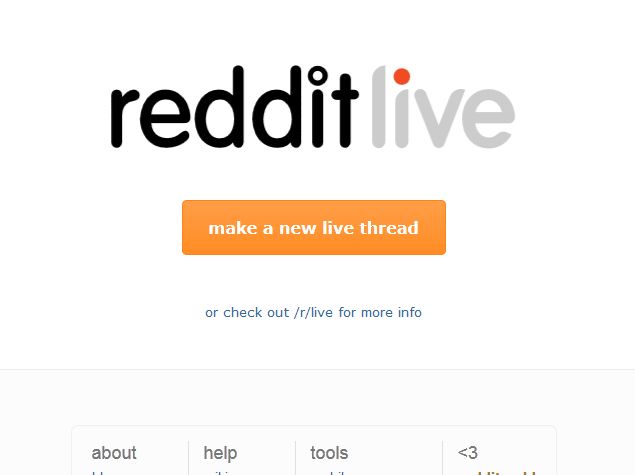 Reddit, a website with a retro-'90s look and space-alien mascot that tracks everything from online news to celebrity Q&As, announced it was testing its live update platform a few months ago, and we have now received news it has officially gone live to all users.

The announcement came on Wednesday via Reddit's Neil in a blog post, stating, "I'm pleased to announce that reddit live is now... ahem... live."

The Reddit Live feature under semi-open beta testing was only accessible by Reddit employees and select beta testers, but has now been made available for everyone. Multiple users can now submit unlimited posts on a Reddit Live thread, and those watching will get live updates from all posters without having to refresh the thread.

Reddit Live updates also support embedding of tweets, images, YouTube videos and other links. "These live threads exist outside of subreddits and are designed to be submitted, like any other link, to whichever (multiple) subreddits are relevant to the thread. Pictures, video, and more can be embedded in the updates by simply pasting a link," mentioned the blog post.

It has been also noted that Reddit Live thread on "conflict in Ukraine" that debuted on Reddit Live during its beta mode, has been updated continuously for almost five months now.

Debuting the new Reddit Live feature, the company is looking for feedback, and users can submit their thoughts on a separate subreddit.

Reddit, which also gets revenue through advertising, has been ramping up efforts of late to attract more advertisers. In April, Reddit unveiled city and country targeting capabilities that allow advertisers to address users by geographic market.

"We've been working hard to improve this platform and have just released some location targeting on the frontpage that will make ads more relevant for location specific products and services like movie premieres (as oftentimes there are different release dates in different countries), products that can only ship to specific areas, concert or other meetups in specific cities, and more," the company had then said.