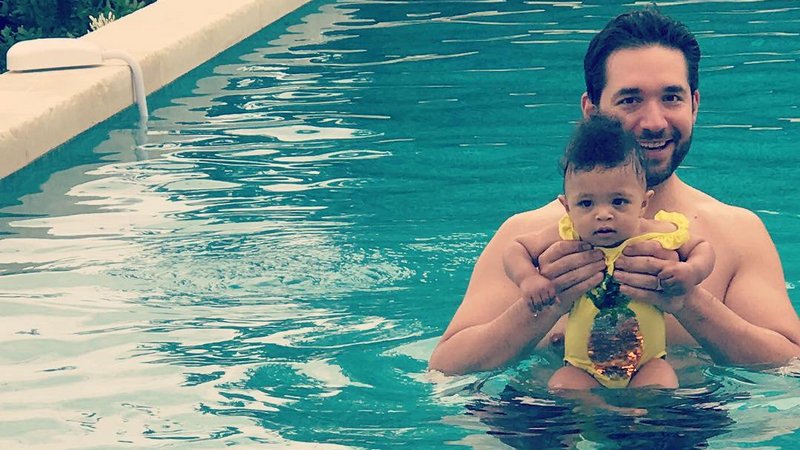 Alexis Ohanian wants other guys to be jealous of him. Not because he's a multimillionaire venture capitalist. Or because he's married to tennis pro Serena Williams.

The Reddit co-founder wants men to covet the time he gets to spend with his 1-year-old daughter, Olympia.

The pair is all over Instagram cheering for mom at her tennis matches, make silly faces with Mickey Mouse ears and toting around favourite doll Qai Qai, who has her own Instagram account with 114,000 followers.

It's all part of his advocacy for making paid paternity leave the new normal in America. When Olympia was born on September 1, 2017, Ohanian was very public about taking the full 16 weeks of paid leave available to him at Initialized Capital, the venture capital firm he co-founded and now runs.

He wants all men in the US to have that option, especially those without his privileges and resources. That includes advocating both for companies to adopt more generous family leave policies and encouraging men to take time off without fear of being stigmatised as uncommitted to their work.

"After coming back, I started hearing from Silicon Valley founders, from employees, who all said the same thing, which was that they appreciated this kind of air cover," Ohanian said in interview with The Associated Press. "Because it meant that there was clear sign from someone who was very ambitious, very career-driven, very goal oriented, and yet I made this a priority."

Ohanian, 35, was in New York this week to launch a two-pronged Dove Men+Care initiative to champion paternity leave.

The Unilever-owned brand started a $1 million fund for fathers with no access to paid leave through their employers. Employees who only get unpaid leave, freelancers and self-employed men are encouraged to apply for a $5,000 grant. The other initiative is a "Pledge for Paternity Leave," asking men to commit to taking their full leave and share their experience. It asks business leaders to pledge to enact paid paternity leave policies.

The US is the only industrialised country that does not federally mandate paid parental leave. Under the Family and Medical Leave Act, many, but not all, employees are entitled to 12 weeks of unpaid leave following the birth or adoption of a child without penalty of losing their positions. It is up to employers whether to offer paid leave.

But it's a good time to be fighting for paid leave in the US.

High-profile companies, fighting for talent in a tight job market, are trying to outdo each other in expanding leave for mothers and non-birth parents, with some throwing in unique perks. Amazon, for instance, pays for the spouses of employees to take time off. Global tech company Cisco System offers three days of paid time off for grandparents. Netflix allows parents to take off as much time as they want during the baby's first year.

The prevalence of employers offering paid paternity leave rose to 29 percent in 2018 from 21 percent two years earlier, according to a report by the Society for Human Resources Management, which polled a randomly selected sample of its 285,000 HR professional members.

There is also increasing bi-partisan momentum for a federal paid leave mandate. Democratic Sen. Kirsten Gillibrand, who is running for president, has introduced a plan to provide workers with 12 weeks of family leave at partial pay. President Donald Trump proposed a plan in his budget this year for six weeks of paid leave.

Still, there is lingering stigma over taking leave for both women and men. A 2016 survey by consulting firm Deloitte found that 57 percent of men and 51 percent of women feared their employers would think them uncommitted if they took parental leave.

Ohanian said he cannot imagine how new parents cope without paid time off. Williams faced complications that left her bedridden after Olympia was born and Ohanian was able to shoulder a lot of the work because of his leave.

"With all the advantages we had, it was still a really stressful period," Ohanian said. "I could not have showed up at work a week later, or two weeks later, knowing that my wife literally could not get herself out of bed with a 2-week-old at home. They would have had to fire me."

Now that Olympia is a chubby-cheeked toddler and Williams is back competing for Grand Slam titles, Ohanian emphasises the delights of fatherhood. He hopes more and more dads will do the same, saying it could almost be a good thing if fatherhood becomes an object of social media "fomo" (fear of missing out).

"Let's be real. We are not posting photos of the 2am blow out. We are still posting those idyllic, polished moments but if we are going to use social to create 'fomo,' let it be for showing up for your kid," Ohanian said.