This purported design - which might never see the light of the day - is reportedly being tested by a select group of users, which includes Geek.com - the website that shared the screenshots.

In the redesign, Google seems to be concentrating on scaling to various screen sizes and resolutions without losing functionality. We noticed that the sidebar is now replaced by a slide-in pane. The compose button is now moved to the bottom right corner, and it now has a new feature down there: reminders. A new pin system replaces starred emails and can be used to pin important emails to the top. In addition, Travel, Purchases, and Finance tabs are now available along with the already existing Social, Promotional, Updates, and Forums tabs. The redesign now looks very similar to Google Now on Android. 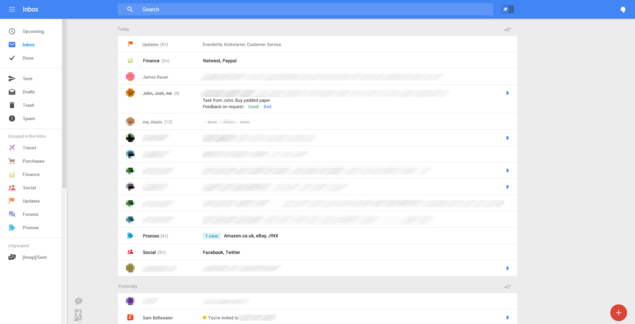 These screenshots look enticing and might catch the fancy of many users. But we would advise them to take it with a pinch of salt considering the redesign is only in the 'testing' phase as of now and might never actually be made public.

We recently reported how Google is planning a major Android update, dubbed Project Hera, that is expected to bring a unified user interface across Google's mobile devices (including Chrome OS). Google is also planning a makeover of its Android app icons to make them similar to Web app icons. The new style is being internally referred as 'Moonshine'.