Prime Minister Narendra Modi on Sunday visited the Google campus where he was given a tour of some of the latest products and forward-looking researches being done by the search engine giant.

PM Modi asked that Khagaul to be pinpointed on Google Earth when he was given a glimpse of the unique tool. Khagaul near Patna is where the great ancient astronomer Aryabhatta had an observatory.

"It is a visit to Google Guru," PM Modi said as he reached its campus from nearby Facebook headquarters. PM Modi was given a tour of four critical projects and their value for the Digital India campaign.

Another project that was shown to PM Modi was Project Iris, smart lens that measure glucose levels. Later, PM Modi participated in a hackathon at Google. Many youngsters in their 20s had come from India to participate in it.

Before leaving Google, PM Modi had a group photo with its top officials.

In his brief remarks, Modi stressed the need to "encourage Hackathon culture" in India so that the youth are inspired to find solutions to the country's problems. With social media becoming a part of today's lifestyle, Modi said people spend a significant amount of time on it.

"This is just the beginning," PM Modi said, adding that in the years to come he expects this to bring qualitative change in life of people. Sundar Pichai, Google CEO announced that Google would provide high-speed Internet services at 100 Indian railway stations by the end 2016, and expand it to 400 eventually. 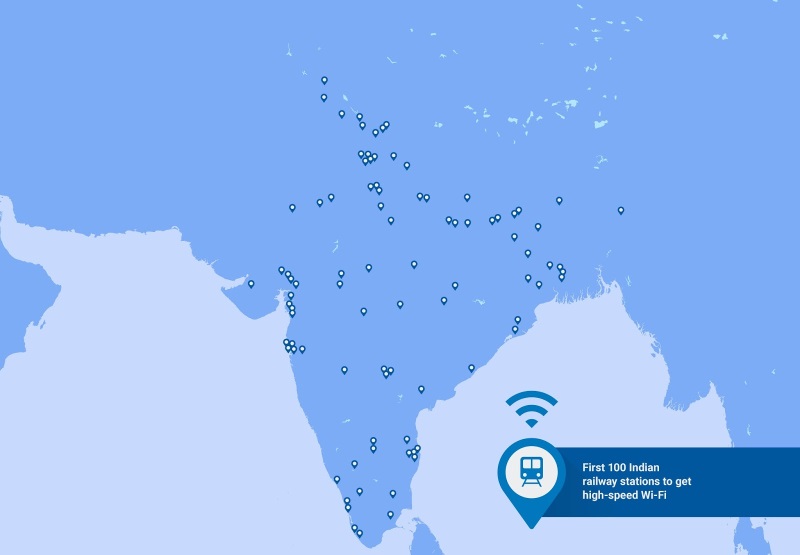 Social media, he said, has become a strong and new power of democracy.

He urged Google employees to help him meet the challenges being faced by India including poverty. 43-year-old alumnus of IIT-Kharagpur, Pichai said the Wi-Fi services will be provided to support PM Modi's 'Digital India' campaign.

He also announced that Google will launch an Android keyboard next month enabling users to type in 11 Indian languages, including Modi's mother tongue Gujarati.

Appreciating Google employees for their hackathons, Modi hoped that such a culture develops in India also.

Noting that technology has given new power to democracy, he urged Google employees to look for solutions to problems like poverty.

The Prime Minister expressed confidence that technology will bring qualitative change in life with time and through its proper utilisation.

In a lighter vein, he said technology was born to save time but what happened was just the opposite.

"Today, everybody spends maximum time on the internet...

Even when a child asks his mother to give milk, she says 'wait, first let me forward this WhatsApp'," Modi said, evoking laughter all around.

Pichai said that there was immense "hunger" for technology in India which was reflected when Google launched Chrome browser some time back and India was the first country to adopt it in major way.

During his tour of Google campus, PM Modi asked that Khagaul in Bihar to be shown on Google Earth when he was given a glimpse of the unique tool. Khagaul near Patna is where the great ancient astronomer Aryabhatta had an observatory.

Pichai explained navigational, safety and other uses of Street View and Google Earth to PM Modi.

Another project that was shown to PM Modi was Project Iris, smart lens that measure glucose levels.

Before leaving Google, Modi had a group photo with its top officials.