Popular Google Doodle Games to be showcased for the next two weeks, starting with Coding for Carrots from 2017, Google announced on Monday in a blog.

Today's Google Doodle most popular games, Coding for Carrots, has a simple, easy to understand interface

Google has started publishing a series of interactive Google Doodles that brings back popular games from past doodles. At a time when people are staying indoors to curb the spread of the novel coronavirus, Google is trying to cheer people up and give them something to pass the time with. Today's doodle has brought back the coding game from 2017 called ‘Coding for Carrots' which celebrated 50 years of Kids Coding. This series will reportedly run for two weeks. There will be 10 doodles in total and all of them will be popular Google Doodle games from the past. Google Doodle games are part of Google's interactive doodles.

As COVID-19 continues to impact communities around the world, people and families everywhere are spending more time at home. In light of this, we're launching a throwback Doodle series looking back at some of our popular interactive Google Doodle games!

The theme for this new initiative is Stay and Play at Home with Popular Past Google Doodles. Coding for Carrots is the first throwback game in the series. It lets you create simple commands that control a rabbit and guide it to collect all the carrots in the level. It can be accessed by simply clicking on the doodle, which will give you a ‘Play' option. It has a kid friendly user interface and works by just dragging and dropping commands. Coding for Carrots was first used as a Google Doodle in 2017 to celebrate 50 years of a coding language for kids called Logo. The Google Doodle game is a great way to keep kids entertained, especially in these times when going out and playing is not an option.

As is tradition with interactive doodles, the Monday's Google Doodle is animated (seen above) and shows one of the ‘O' sitting at a computer (the first ‘O') and typing away. Hovering over it show the theme of the series, with the specific doodle named at the end - "Stay and Play at Home with Popular Past Google Doodles: Coding (2017)". There is a ‘Play' button as a part of Monday's Google Doodle, and clicking on the doodle also shows a search for “popular google doodle games.” The Coding for Carrots doodle shows up right on top, with a play button both on the doodle and below it (as seen below). Nine other games in the series have been marked as “Coming soon.” Clicking on the play button will take you to a full screen version of the doodle, where you can play it. 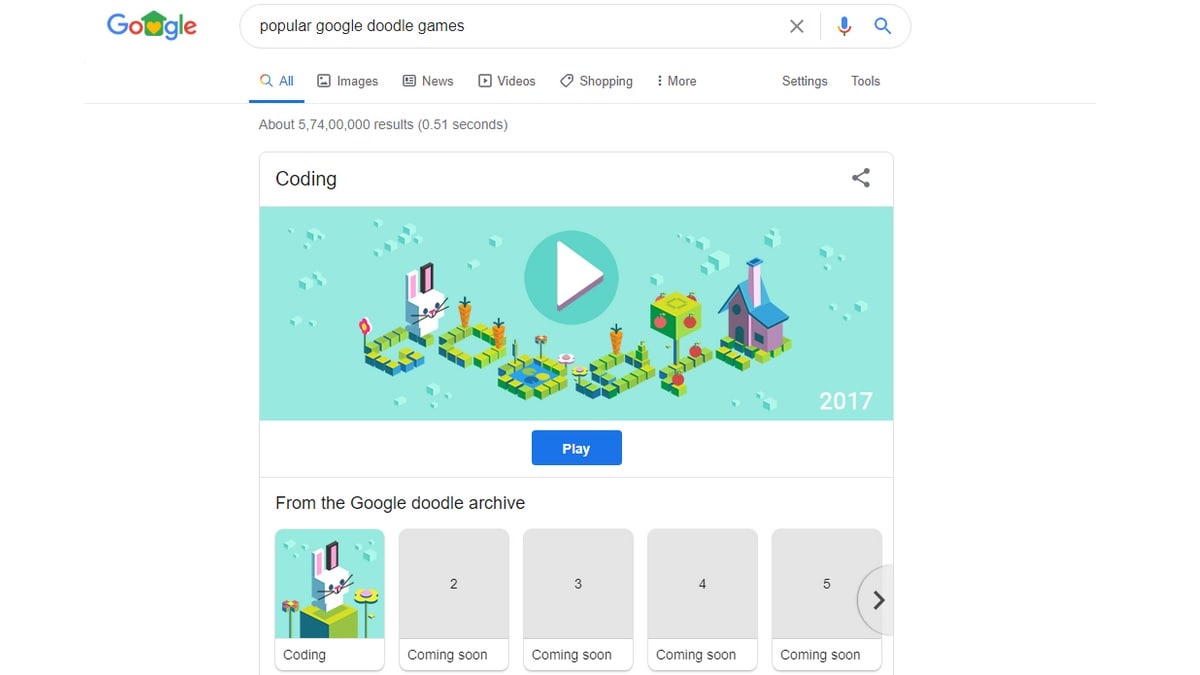 There are 9 more Google Doodle games to come

The Stay and Play at Home with Popular Past Google Doodles: Coding (2017) doodle from April 27 is available in India, much of Europe, Russia, parts of Africa and South East Asia, Australia, as well as both North and South America. You can check out a list of interactive Google Doodles in the meanwhile. According to a report by 9to5Google, the search giant will be putting out these games over two weeks. Multiplayer games are also expected to be part of this initiative, the report adds. It might be that Google plans on pushing out five games this week till Friday and the remaining five over the next week.

Recently, Google announced free access to the paid version of its cloud-based game streaming platform Stadia and now with the Google Doodle games campaign, the company wants to promote gaming at home in order to keep people entertained while they stay at home avoiding the spread of coronavirus.