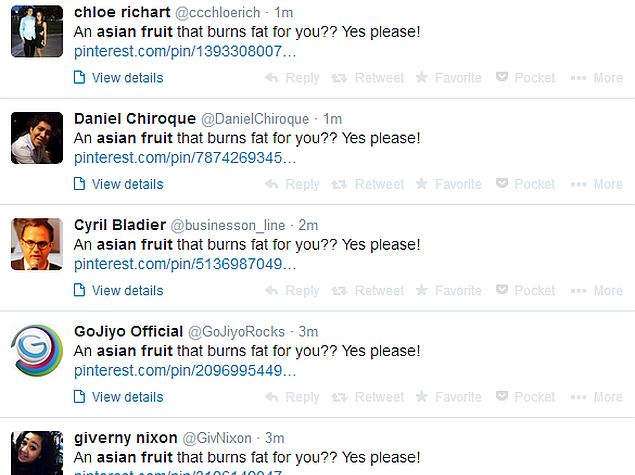 Affected users were spamming weight-loss ads such as "An asian fruit that burns fat for you?? Yes Please!", and "I'm 12 pounds lighter as of today!!". Both the spam tweet-types include followed by a Pinterest (Review) link.

Pinterest in a statement to The Next Web responded to the issue, saying, "The security of Pinners is a top priority. We were alerted to some instances of spam and responded by immediately placing impacted accounts in safe mode, and reaching out to Pinners as we solved the issue. We're constantly working on ways to keep Pinners safe through reactive and proactive steps, as well as educating them on the importance of using complex and unique passwords."

The Next Web notes that affected users should reset their passwords, and de-associate any third-party apps and services using it. Pinterest was hacked earlier this year in March. Multiple Pinterest users had then reported spam posts issuing from their accounts, including weight loss ads and 'butt pics'.

It has been understood that the scam takes root by sending a phishing-style Pinterest email claiming that a friend or a popular personality has shared a link. Clicking on the image in the email could compromise user information to the hackers.

In March, the Better Business Bureau sent out a scam alert warning to users, telling them to be careful when clicking on Pins. Common scam Pins included celebrity and beauty photos, giveaway offers, before and after diet pictures, and even infographics. Hackers were said to be accessing accounts in various ways such as through a third-party app and malicious code.

Earlier this month began dabbling with ramping up ad revenue by letting marketers promote their own "pins". The startup added do-it-yourself promoted pins, expanding a test of serving up ads in the form of Pinterest posts prominently displayed on search or category pages.

Pinterest also began providing businesses with improved analytics regarding how much interest pins generate and how profile pages are doing.