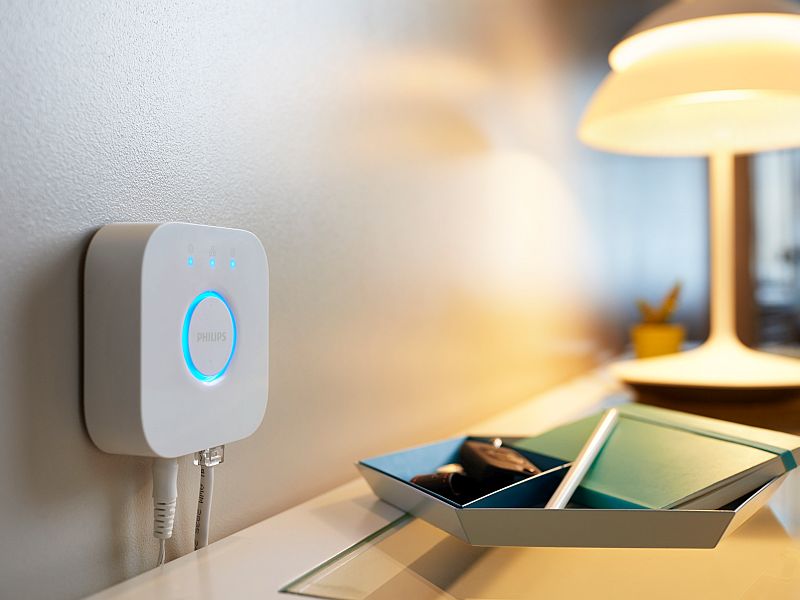 Philips has added Apple HomeKit support to its popular Hue Web-enabled home lighting system, specifically the Hue Bridge control unit. This will allow users to control lighting at their home (without even being at home) with voice-commands through Siri, Apple's voice-based virtual assistant, from devices including iPhone, iPad, iPod touch, or Apple Watch. The new Philips Hue Bridge is now available in Europe and North America from Tuesday. The Philips Hue Bridge 2.0 has been priced at $59 (approximately Rs. 4,000) for users who want to upgrade from previous generation. The standalone new Philips Hue starter kit has been priced at $199 (approximately Rs. 13,000) and can be purchased from the company's store or other online retailers.

For those unaware, the bridge available in the starter kit of Hue will allow the bulbs to connect to the home Wi-Fi router. Once users have one of the Philips bulbs, lamps, or strips, and a bridge, they will then be required to download the Hue app (available for Android and iOS) on their smartphone. Once done, the bulbs are supposed to be connected to their existing holders, after which they can remotely controlled via the app.

Philips Hue users will have to update to version 1.10 after which the new Philips Hue Bridge 2.0 will be able to support connected smart home appliances alongside the Apple HomeKit and iOS 9. The company also rebranded Hue Lux bulbs to Hue White, and, introduced a new Hue LightStrip, which will be available in 2-metre lengths ($90) with 1-metre extensions ($30).

Announcing the new Bridge 2.0, Eric Rondolat, Chief Executive Officer at Philips Lighting said, "Lighting is the most accessible aspect of the connected home, and as the lighting expert for the Internet of Things we are taking connected lighting to the next phase. By integrating Philips Hue with Apple HomeKit, we are broadening people's experience of light beyond what has been previously possible, providing seamless interoperability with other connected home devices."