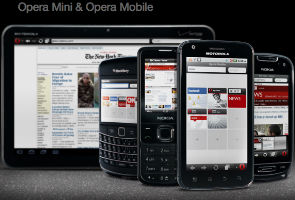 Browsers such as Opera, Internet Explorer and Google Chrome are used for accessing Internet.

"It is a good time to get into this (digital devices space). We would look at partnering someone like say Huawei to build our browser onto their platform," shares Sunil Kamath, Opera Software Sales Director (India and SAARC).

He, however, added that no such deals have been signed as of now but the company, which offers Opera Web browser, is exploring the option. The company offers browsers for computers, mobiles and tablets and other devices.

The government has declared that analogue cable service would be phased out and complete digitisation will usher in cable sector in Delhi, Mumbai, Chennai and Kolkata by November 2012.

To implement this decision, STBs have to be installed in households subscribing to cable service. According to estimates, there are at over 103 lakh subscribers in the four metros alone.

IT peripherals maker Amkette had recently launched a new device 'EvoTV' priced at Rs 9,995, which allows users to surf Internet on their television sets. Globally, Apple and Google have also introduced similar offerings.

Opera has also partnered with telecom companies like Bharti Airtel and Idea Cellular to distribute a co-branded version of Opera Mini, its mobile phone browser. Many handsets, especially those from domestic handset makers, come embedded with Opera browser.

"Such tie-ups help us reach out to more consumers and gives us another distribution channel," Kamath said, adding that Opera Mini has close to 179 million users globally. Though he declined to comment on India-specific numbers, Kamath said its userbase in the country has grown 4-5 times over past two years.

"India is a strategic market for us. We support 14 Indian languages and we are confident that we will continue to see the strong growth that we have seen in the last few months," he added.