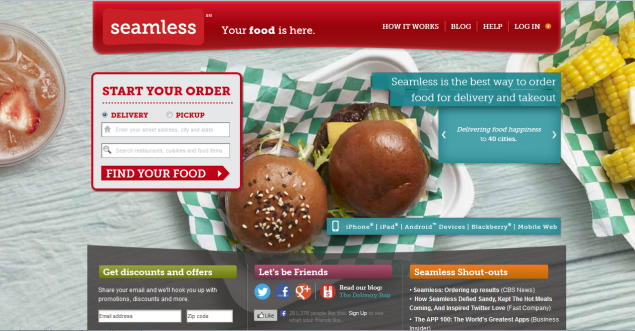 Two of the US's biggest online food delivery businesses said they are merging in a deal that they hope will drive more orders, in more cities, through their platforms.

GrubHub and Seamless, which allow consumers to easily order online from various restaurants, are part of a group of fast-growing businesses that standardize local services under a national umbrella. Think restaurant reservations, where OpenTable dominates, or car services, where privately held startups such as Uber are making significant inroads.

The services did not disclose financial terms of the deal, which is subject to regulatory approval. It is expected to close by August, the services' executives said.

Online takeout services allow consumers to browse hundreds of menus online, along with reviews by fellow diners, and then order from the service, which notifies the restaurant. The services store payment information, cutting back on the time it takes to order food. Restaurants like the services because they cut back on phone calls at peak times.

Last year, GrubHub and Seamless coordinated $875 million in takeout sales, resulting in more than $100 million in combined revenue, they said in a statement.

But the overall U.S. takeout business is worth around $69 billion annually, with most of those sales coming from diners picking up the phone and calling the restaurant. "Our number one competitor is the paper menu," Maloney said.

Both companies have attracted significant backing, including more than $84 million for Chicago-based GrubHub from investors such as Benchmark Capital and Lightspeed Venture Partners.

New York-based Seamless's backers include private-equity firm Spectrum Equity, which paid $50 million two years ago for a minority stake in the business.

GrubHub is the larger of the two services, covering 20,000 restaurants in 500 cities. Maloney, its founder and chief executive, will become CEO of the combined company, while Seamless CEO Jonathan Zabusky will serve as president.

Seamless currently works with 12,000 restaurants in 40 cities, including in London.
The combined company will have 600 employees.

Other players in the sector include New York-based Delivery.com and London-based Just Eat.