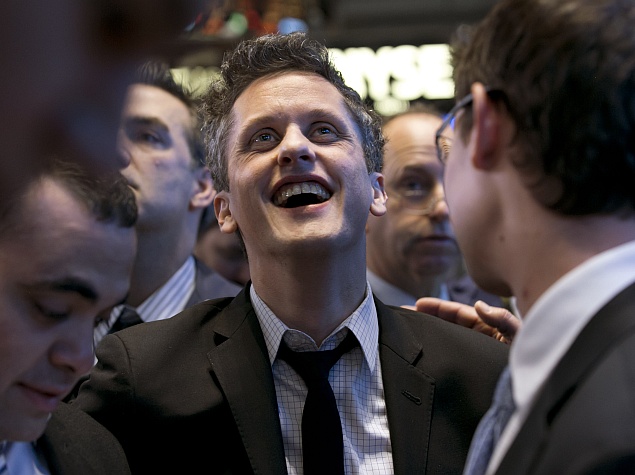 Box's shares soared 66 percent in their stock market debut Friday despite the online storage provider's decade-long history of losses, a showing that may encourage more unprofitable technology startups to go public this year.

The start on the New York Stock Exchange came after Box Inc. sold 12.5 million shares for $14 apiece in a delayed IPO that raised $175 million. That represented about a 10 percent stake in the company.

The wide usage of Box's service probably helped drum up more interest in the company's initial public offering, according to Sam Hamadeh, who runs PrivCo, a firm that tracks startups.

"I think this is going to be a short-term pop" in Box's stock price, Hamadeh said. "What you are seeing is a lot of buying by doctors, lawyers and dentists who just know Box's name and didn't pay any attention to the financials. And the financials are horrendous."

Since college dropout Aaron Levie founded Box with his friend Dylan Smith in 2005, Box has accumulated $483 million in uninterrupted losses, according to its IPO filing. The Los Altos, California, company also warned investors that it won't be making money anytime soon.

Concerns about Box's shaky finances contributed to the company's decision to postpone its IPO last July.

Investors now seem more intrigued with Box's pioneering role in online storage a part of a phenomenon known as cloud computing. The demand to store documents, photos and other digital content in remote data centers so the material can be accessed on an Internet-connected device has been steadily rising as more people rely on smartphones and tablets for their computing needs.

"The leaders in this new environment are being created right now, and there are a lot of investors that recognize that," Levie, 30, said in a Friday interview.

Dropbox is considered to be among the leading candidates to go public this year, especially after investors embraced Box's IPO.

"This validates that our market space is on fire and ready to grow," said Yorgen Edholm, CEO of Accellion, another online storage service. "The waters are looking much warmer now and it's only a matter of time before the next competitor, ahem, Dropbox jumps in."

Dropbox declined to comment in its IPO plans. The San Francisco company was valued at $10 billion in its last round of fundraising last year.

Levie, who remains Box's CEO, was among the biggest winners Friday. He owns nearly 4.1 million shares, now worth $95 million.