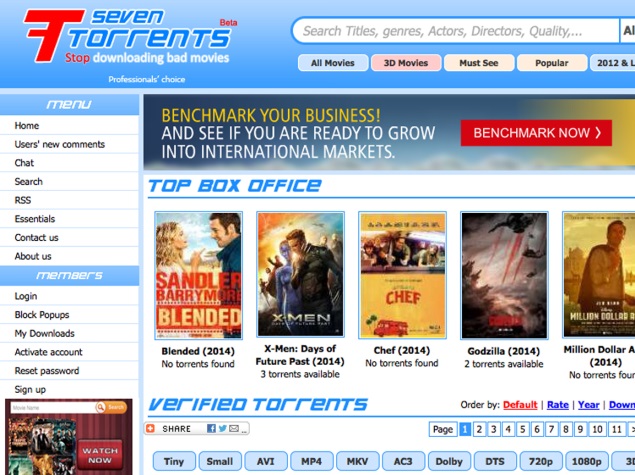 Content thieves attract visitors with the promise of free downloads and streams of the latest hit movies, TV shows and songs. Then they profit by pulling in advertising from around the Internet, often concealing their illicit activities so advertising brands remain unaware.

Pirate websites run ads that are sometimes covered up by other graphics. They automatically launch legitimate-looking websites as pop-up windows that advertisers don't realize are associated with piracy. At the end of the day, the pirate website operators still receive a check for serving up a number of views and clicks.

The illicit activity is estimated to generate millions of dollars annually. That's only a small portion of the roughly $40 billion of online ad spending every year. Yet it is helping to feed the creation of millions of copyright-infringing websites that provide stolen content to a growing global audience.

"(Companies) placed their ads on the assumption that they were going to be on high-quality sites and they're not," said Mark Berns, vice president of MediaLink LLC, a consulting firm that produced a study looking into the practice called "Good Money Gone Bad."

The study, commissioned for the Digital Citizens Alliance, a Washington-based group that advocates for a safer Internet, sampled 596 of the worst-offending websites. Researchers discovered that the infringing websites were displaying ads from 89 premium brands like Walmart, McDonald's, Google, Microsoft and Ford.

"It's certainly fair to say that millions of dollars in revenue from premium brand ads are supporting content theft sites," Berns said.

That's similar to an estimate from DoubleVerify, an online fraud protection company. According to a DoubleVerify report released last May, rogue website operators cheat mainstream advertisers out of $6.8 million each month, mainly by "laundering" ad traffic in ways that are hard to detect.

"There's growing awareness of the unscrupulous tactics that sites will go to to collect their dollars," said DoubleVerify chief operating officer Matt McLaughlin.

Several advertisers and top technology firms that operate ad networks - like Google and Microsoft - say the fraud is difficult to stop. Ads for Google's Chromecast streaming device and Microsoft's Bing search engine were among those that appeared on pirate websites.

Microsoft said in a statement that while it monitors where its ads end up, it sometimes relies on others bringing infractions to its attention "to take actions on non-compliant sites."

Google said it invests significant resources to keep its and its partners' ads from appearing on pirate sites and requires users of its AdSense service to agree to its anti-piracy policies. "When we find violators of these policies, we'll take the appropriate actions - including blacklisting URLs and, in some cases, ending our relationships with publishers - as quickly as possible," a spokesman said in a statement.

Dish Network said in a statement that it applies "industry-leading standards ... to continually take measures that prevent our advertising from appearing on pirate sites."

Wal-Mart Stores Inc. spokesman Dan Toporek said the company blocked tvboxnow.com, a website the Alliance report found received its ads. Toporek said the Walmart logo may have been used by a third party that wasn't so careful.

Yet it is easy to find legitimate advertisers on websites that peddle in copyright infringement.

When The Associated Press typed in the Web address WWW.UPLOADHOUSE.COM - a domain that Google said it removed 97 times from its search results because of copyright infringement notices - one of the first ads on the home page was for an HP Chromebook 11, "made with Google."

Content theft website operators are based all over the world in countries like Russia, Australia and Indonesia. Most shy away from attention. Several people who registered websites identified by Google's Transparency Report as frequent targets of copyright notices didn't respond to messages seeking comment.

The AP received an anonymous response from the email address listed as belonging to the registrant of piracy website SevenTorrents.org. The respondent said that while some advertisers prevent their ads from going on the site, others don't.

"Famous advertising companies like RightMedia blocked this site, I just let other advertisers which do not use those services (place) ads," the respondent wrote. "They are paying."

The person did not provide their name or location. According to a search on Whois.net, the site is registered to "Mike" in the Adygea republic of Russia.

The respondent also directed The AP to look at the "About Us" section of the website.

The section reads: "We make it easy for those users who are looking for pirated movies to find what they are looking for." At the same time, the site disavows wrongdoing. "I do not encourage or support people who rip or upload these stuff."

Advertising industry groups are fighting the problem, with limited success.

The Interactive Advertising Bureau's chief operating officer, Patrick Dolan, said in an e-mail interview that despite efforts at certifying ad networks that follow strict guidelines, it's an insurmountable task to track the trillions of ads and millions of websites.

"New sites are created every day, names change, URLs change," he said. "It's impossible to always stop the ads appearing in real time."

John Montgomery, chief operating officer of major ad-buying agency GroupM Interaction, said that by blacklisting some 4,000 pirate websites, his digital ad agencies withheld some $8 million from pirate websites operators in 2012 and $13 million in 2013.

But he says GroupM and other advertising agencies need to get better at choking off the flow of funds.

"We're only one agencies group, accounting for 10 percent of (digital advertising) buying," he says. "If we had a more sophisticated list we could have withheld more."

"This is a solvable problem," said Ruth Vitale, executive director of CreativeFuture, a newly formed piracy-fighting group of movie studios, production companies and creative worker unions. She urged studios and creative workers to speak up. "The creative community hasn't demanded it ... But if our rights are to be respected online, that has to change."