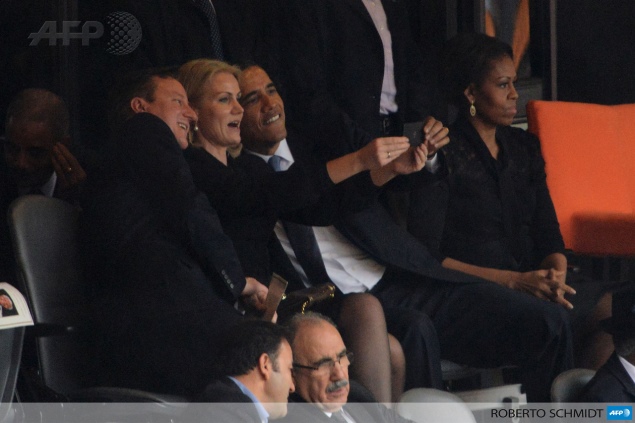 US President Barack Obama may have moved the masses attending Nelson Mandela's memorial service with his stirring eulogy on Tuesday, but it was his grinning "selfie" with the Danish and British premiers that set social networks abuzz.

In a candid moment captured by AFP photographer Roberto Schmidt, Denmark's Helle Thorning-Schmidt can be seen holding up her smartphone, with Obama lending a helping hand, as they pose for a picture with David Cameron, all three of them smiling broadly in their seats at Soweto's World Cup stadium.

First Lady Michelle Obama, sitting to the left of her husband, does not join in with the lightheartedness, keeping her eyes firmly trained on the podium where world leaders were paying tribute to South Africa's anti-apartheid hero Mandela, who died Thursday aged 95.

The so-called selfie short for self-portrait was quickly picked up by major international news outlets and went viral on social media sites, with many questioning whether the moment of mirth was appropriate for the occasion.

"There should be a moratorium on 'selfies' during memorials and funerals, no?" tweeted @JeffryHalverson.

"Is This The Most Important Selfie Of 2013?" headlined the US-based social news website Buzzfeed, noting that Michelle Obama seemed "not amused" by the impromptu photoshoot.

Cameron's Downing Street office said it had "no comment" on the photo, while the White House also made no comment. There was no immediate reaction from Copenhagen.

The act of taking selfies has become increasingly popular in recent years. The word itself was named this year's word of the year by Oxford Dictionaries.

A selfie is defined as "a photograph that one has taken of oneself, typically one taken with a smartphone or webcam and uploaded to a social media website".

The AFP photographer who captured the leaders in their group shot said his picture showed the dignitaries in a rare unscripted moment.

"It was interesting to see politicians in a human light because usually when we see them it is in such a controlled environment. Maybe this would not be such an issue if we, as the press, would have more access to dignitaries and be able to show they are human as the rest of us," he said.

But Schmidt said he feared the photo's global impact could overshadow what was "a celebration for an obviously exceptional person".

"The AFP team worked hard to display the reaction that South African people had for the passing of someone they consider as a father. We moved about 500 pictures, trying to portray their true feelings, and this seemingly trivial image overshadowed everything else," he said.

"I think it's a sad reflection on how sometimes we focus, as a society, on trivial everyday happenings."

Schmidt's photo of the three leaders posing for the selfie can be found on AFP's Tumblr page.