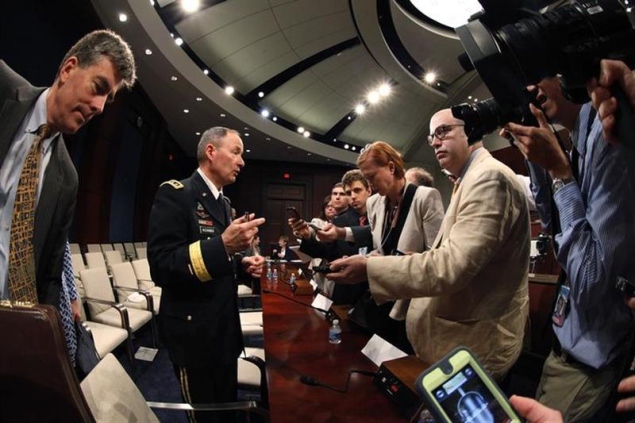 The head of the National Security Agency said US surveillance programs had helped disrupt more than 50 possible attacks since September 11, 2001, as sympathetic members of Congress also defended the use of the top secret spying operations.

In the first public hearing dedicated to the programs since former NSA contractor Edward Snowden exposed them this month, members of the House of Representatives Intelligence Committee showed little will on Tuesday to pursue significant reforms.

Instead, both US officials and lawmakers spent hours publicly justifying the phone and Internet monitoring programs as vital security tools and criticized Snowden's decision to leak documents about them to media outlets.

General Keith Alexander, the head of the NSA, said Snowden's leaks had inflicted "irreversible and significant" damage on national security.

"I believe it will hurt us and our allies," Alexander told the House intelligence panel, which helps oversee the vast surveillance efforts. Snowden's disclosures have ignited a political furor over the balance between privacy rights and national security, but President Barack Obama and congressional leaders in both parties have backed the programs and no significant effort has emerged to roll them back.

While critics have blasted the surveillance as government overreach without enough independent oversight, proposed legislative remedies discussed so far have focused on tightening rules for contractors and making the secret court that approves warrants for surveillance more transparent.

"People who are skeptical of the program have no understanding of what the program is," US Representative Mike Rogers, the Republican chairman of the intelligence panel, told reporters after the hearing.

Alexander told the panel the monitoring was not "some rogue operation," and defended it as legal, closely supervised and crucial to defending Americans. "I would much rather be here today debating this point than trying to explain how we failed to prevent another 9/11," he told the committee in his second public appearance before Congress since the programs were exposed.

"In recent years these programs, together with other intelligence, have protected the US and our allies from terrorist threats across the globe to include helping prevent potential terrorist events over 50 times since 9/11," he said.
Alexander said at least 10 of those plots involved US targets or suspects in the United States.

Bomb attacks thwarted
Alexander promised to give classified details of all of the foiled incidents to the House and Senate intelligence committees within 24 hours.

Sean Joyce, deputy FBI director, offered information on two of the cases - a plot to bomb the New York Stock Exchange and a conspiracy to give money to a Somali militia designated by the United States as a terrorist group.

Officials had revealed last week two other such potential attacks: a 2009 plan to bomb a Danish newspaper that had published cartoons of the Prophet Mohammad and a plot by Islamist militants to bomb the New York subway the same year.

Members of the intelligence committee said they were holding the hearing to set the record straight about how the programs operated and their importance for national security.
Representative Dutch Ruppersberger, the panel's top Democrat, said the leaks "put our country and our allies in danger by giving the terrorists a really good look at the playbook that we use to protect our country. The terrorists now know many of our sources and methods."
Snowden, who worked at an NSA facility in Hawaii for 15 months since March through a contract with Booz Allen Hamilton defended his actions in an Internet chat on Monday and vowed to release more details on the extent of the agency's access.

Snowden is believed to be hiding in Hong Kong as the US Justice Department conducts a criminal investigation.

Asked what was next for Snowden, Joyce gave a one-word response: "Justice." Alexander said he had "significant concerns" about how a low-level contractor like Snowden could gain access to so much information and said it was part of the FBI's investigation. "We do have significant concerns in this area and it is something that we need to look at," he said.
He said the NSA was considering starting a "two-person control" system in which no one could download sensitive data without a second person there to approve it.

After the hearing, Alexander told reporters that Snowden had gained access to some of the information he had downloaded during his NSA training.

Small reforms
A handful of lawmakers have urged their colleagues to rein in the surveillance, but they are not in the majority.

"When all the dust settles we're likely to maintain the status quo there doesn't appear to be a big coalition wanting to change things," said Darrell West, a political analyst at the Brookings Institution.

Republican Senator Rand Paul of Kentucky, a potential 2016 presidential candidate, has called for Americans to bring a class-action lawsuit against the US government.

But the main decision-makers on intelligence matters have spent more time defending the programs than talking reform. And the reforms they have discussed have not been sweeping.
Democratic Senator Dianne Feinstein, head of the Senate Intelligence Committee, said last week that Congress would consider legislation to limit government contractors' access to certain classified information. Industry executives and some corners of the intelligence community are already pushing back against such a move.

Obama, meanwhile, told PBS's "Charlie Rose" show on Monday that he will meet with a privacy and civil liberties oversight board. He sought to ease concerns about the programs' scope.

"What I can say unequivocally is that if you are a US person, the NSA cannot listen to your telephone calls, and the NSA cannot target your emails and have not," Obama said.
Google said on Tuesday it asked the US Foreign Intelligence Surveillance Court to allow it to publish aggregate numbers of national security requests separately from criminal requests.
Microsoft, Facebook and Apple, released limited information about the number of surveillance requests they receive, including routine police inquiries, under an agreement struck with the US government last week.