NSA collects under 30 percent of all US phone data: Reports 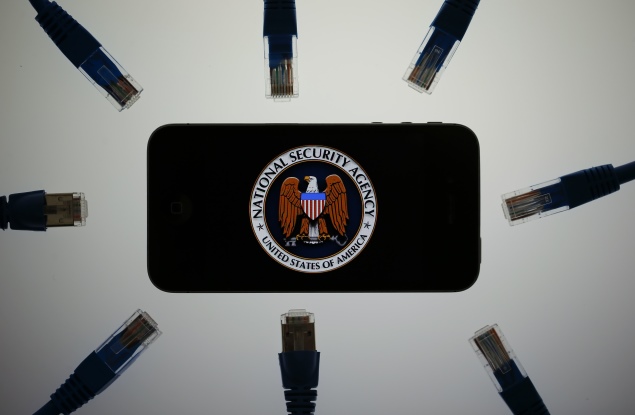 The National Security Agency collects less than 30 percent of calling data from Americans despite the agency's massive daily efforts to sweep up the bulk of U.S. phone records, two U.S. newspapers reported Friday.

Citing anonymous officials and sources, The Washington Post and The Wall Street Journal both said the NSA's phone data collection has had a steep drop-off since 2006. According to the newspapers, the government has been unable to keep pace since then with a national surge in cellphone usage and dwindling landline use by American consumers.

The Post said the NSA takes in less than 30 percent of all call data; the Journal said it is about or less than 20 percent. In either case, the figures are far below the amount of phone data collected in 2006, when the government extracted nearly all of U.S. calling records, both newspapers reported. NSA officials intend to press for court authorization to broaden their coverage of cellphone providers to return the government to near-total coverage of Americans' calling data, the newspapers said.

The lowered estimates for the sweep of government surveillance would be significant because federal judges, members of government task forces and media accounts based on documents provided by NSA leaker Edward Snowden have all described the NSA's bulk metadata collection as sweeping in millions of records from American phone users. Lowered estimates could be cited by officials to alleviate privacy and civil liberties fears, but they could also raise questions about the government's rationale for the program - that the NSA's use of all Americans' phone records are critical in preventing potential terrorist plots.

National security officials have said that the collection of bulk data is essential to national security because it provides a massive pool of calling records and other metadata that NSA analysts can quickly search to pinpoint calling patterns showing evidence of potential terror threats. Congressional critics have pressed efforts to end the bulk phone data sweeps, and two panels of experts have urged President Barack Obama to end the program because they see little counter-terrorism advantages and say the program intrudes on personal liberties.

Obama has committed to ending government storage of phone records but still wants the NSA to have full access to the data. NSA and DNI officials declined to confirm or discuss the reports.

Civil liberties groups said they were not reassured by the reports, saying the government still intends to gather phone records from all American users. "To accept their legal reasoning is to accept that they will eventually collect everything, even if they're not doing so already," said Jameel Jaffer, deputy legal director for the American Civil Liberties Union.

Verizon and AT&T said last December that they would provide figures this year on data requested by the government in law enforcement and intelligence investigations. But the Journal reported last year that several major cellphone entities including Verizon Wireless and T-Mobile were not part of the NSA's bulk metadata collection. It is not clear why cellphone providers would not be covered by the NSA legal authority.

Intelligence officials are already moving to alter the structure of the phone surveillance program to conform to changes Obama ordered last month.

On Friday, Office of the Director of National Intelligence, or DNI, posted a government website appeal to private companies to develop ways for the government to continue its phone record searches without storing a massive inventory of phone data. The posting, onFedBizOpps.gov, said the DNI is "investigating whether existing commercially available capabilities can provide for a new approach to the government's telephony metadata collection program."

The Associated Press reported last month that the DNI is already funding five research teams across the country in an effort to develop an encrypted search technique that could be used by the NSA to securely scan phone databanks held elsewhere.

In a related development, the secretive Foreign Intelligence Surveillance Court in Washington on Thursday authorized two major changes in the phone collection program that Obama committed to in January. The court agreed to require judicial approval for each internal NSA search of telephone data for terrorist connections and it will narrow the numbers of American phone users whose records can be scanned during each search, the DNI reported.

In the first instance, the NSA now must provide judges with "reasonable, articulable suspicion" for each search of phone data for terrorist connections. That hurdle can be lifted during national emergencies. And the court ruling now scales back the NSA's use of a "three-hop" system in its searches - allowing the agency to scan the records of those in phone contact with a terror suspect and a second wave of people in touch with the first group, but no longer allowing searches of a third wave of phone contacts.

Chief Justice John Roberts on Friday named two new judges to the secret court. Roberts said that U.S. District Judges James E. Boasberg and Richard C. Tallman joined the court on Jan. 27. Boasberg was appointed by Obama, Tallman by President Bill Clinton. Their appointment will likely do little to dampen criticism that the majority of FISA judges picked by Roberts are Republicans.

Google's Olympic Charter doodle continues to fly the gay flag
An idea that stinks? Body odour as your biometric id