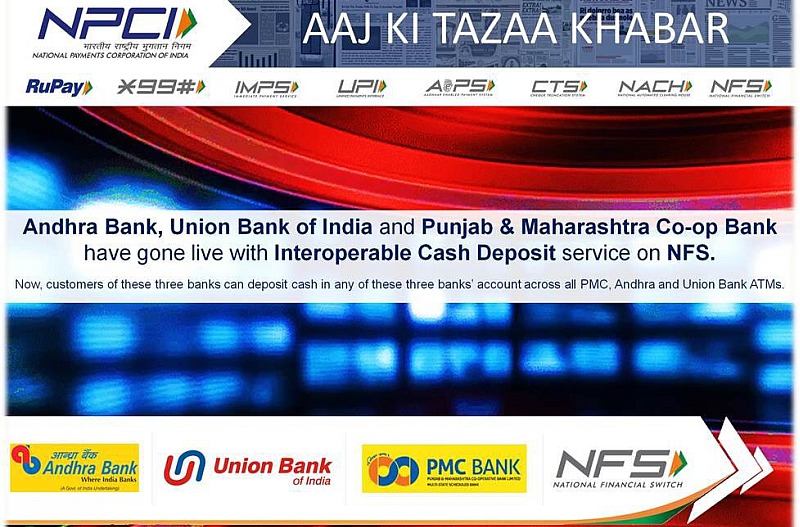 If you have an account with Andhra Bank, Union Bank of India, or the Punjab and Maharashtra Co-op Bank, you can use the cash deposit machines at any of these banks' ATMs to deposit money. This is part of a rollout by the National Payments Corporation of India (NPCI) to allow you to make all deposit machines in the country interoperable, the way ATMs are for withdrawals.

The NPCI has ambitious plans. It's behind the Unified Payments Interface (UPI), which launched in April with the goal of simplifying online payments. On the offline side of things, the NPCI runs the National Financial Switch (NFS), a network of shared ATMs in India.

If the UPI is a common platform for banks to interconnect online, then the NFS is the offline equivalent that allows you to withdraw money from any ATM, even if you don't have an account with the bank whose ATM it is. Now, it's being expanded to allow interoperability for cash deposits.

Until now, if you wanted to use a cash deposit machine to add money to your bank account, you had to go to find an ATM from your bank and then add the cash. It's not always convenient, and it makes sense that if you can withdraw your money from any ATM, you should be able to deposit your money in the same way. The NPCI has added interconnectedness with three banks with a goal to make all cash deposit machines in the country interoperable, according to a tweet by AP Hota, MD and CEO NPCI.

This is one of the ways in which the NPCI has been working to modernise banking in India. While customers have gone online, banks are still largely stuck in existing systems and processes - allowing for new companies that don't have to worry about legacy requirements to disrupt the space. The banks are evolving too - banks now have their own apps, wallets, and allow you to create accounts online - but new changes, such as the UPI or the evolution of the NFS will also go a long way to making your bank account more up to date in a digital world as closed systems start talking to each other and interconnected accounts become easier to use through new mobile applications.