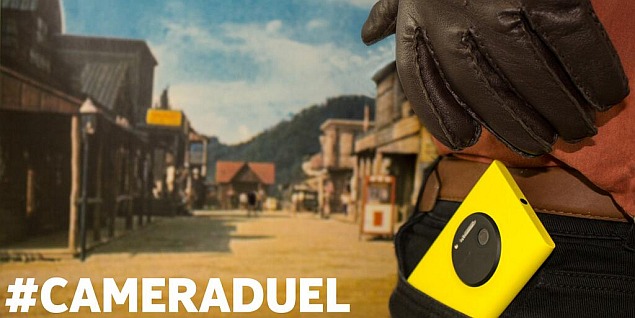 Nokia, the Finnish smartphone maker, has challenged Sony to a '#cameraduel'. The gauntlet was thrown by Nokia over Twitter, and pits last year's Nokia Lumia 1020 against the recently launched Sony Xperia Z2 smartphone.

Sony, in the Twitter post on Tuesday, had stated "Picture-perfect moments deserve award-winning camera technology, see how with #XperiaZ2" to which Nokia UK replied "This town ain't big enough for the both of us, @sonyxperiagb!," followed by an image. Sony at the time of writing had not replied to Nokia's post.

As for which device will actually win a camera duel between the Nokia Lumia 1020 and Sony Xperia Z2, you'll have to wait till we get a review unit of the Xperia Z2 before we give you our verdict.

Nokia also made fun of the recently launched Samsung Galaxy S5 handset on Twitter by stating "Stand out from the crowd! #MWC14 #UNPACKED" and posting an image of a Nokia Lumia handset that also mentions "NOT THE SAMESUNG ;)."

Stand out from the crowd! #MWC14 #UNPACKED pic.twitter.com/NFPTd5vNzV