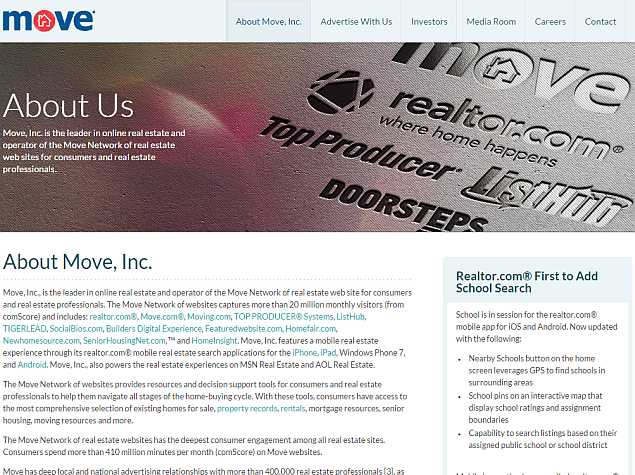 Rupert Murdoch's News Corp said it would buy Move Inc , the owner of property websites such as realtor.com, for about $950 million to expand its digital marketing business.

News Corp said it would pay $21 per share for Move, a premium of 37 percent to the company's closing price on Monday. Moves's shares jumped to $20.94 in premarket trading.

"In addition to boosting Move's subscription, advertising and software services, this acquisition will give News Corp a significant marketing platform for our media assets," News Corp CEO Robert Thomson said in a statement.

News Corp, which owns the Wall Street Journal as well as newspapers in the United Kingdom and Australia, is looking to expand its digital offerings in the face of dwindling advertising revenue from its print business.

Speculation that Move would be acquired increased in July when Zillow agreed to buy Trulia for $3.5 billion in July, combining the top two U.S. real estate websites.

Move, whose sites are accessible through move.com, reaches about 35 million people per month, making it the third-largest U.S. property website operator.

Realtor.com, like trulia.com and zillow.com, lists properties for sale or rent on behalf of homeowners and agents and get revenue through subscriptions from real estate agents and by selling advertising.

But while revenue has been rising, profits in the industry have been elusive. Trulia and Zillow lost a combined $30 million in 2013 while Move had a profit of $574,000.

CRT Capital analyst Neil Doshi had expected Move to be acquired, but was surprised that News Corp was the buyer.

"I think it fits well into the whole News Corp family," said Doshi, who sees room for further mergers in the fragmented sector.

Benchmark Co analyst Daniel Kurnos wrote on Sept. 11 that he expected Move's revenue to grow faster in 2015 as the U.S. housing market picks up.

News Corp said it would commence a tender offer for Move shares within 10 business days and expected the deal to close by the end of the year.

Up to Monday's close, Move shares had gained 5 percent since reports in July that Zillow was in talks to buy Trulia.

Apple Removes Launcher From App Store; Calls It a 'Misuse' of Widgets: Report
Wearable Robots Could Be a Reality Soon