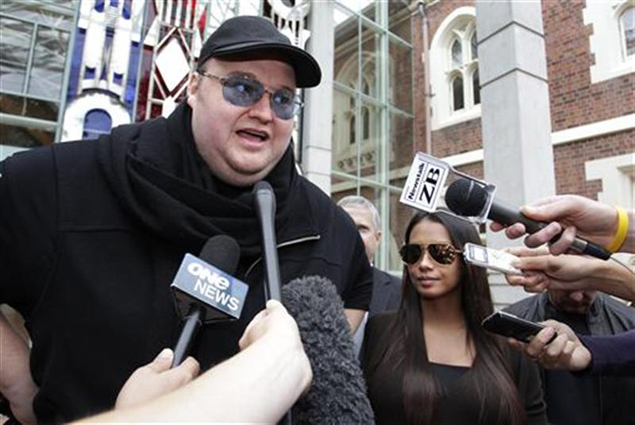 Megaupload founder Kim Dotcom has won the right to demand the United States hand over all the evidence in its online piracy case against the Internet entrepreneur, New Zealand's Supreme Court ruled on Thursday.

The ruling by New Zealand's highest court is a minor victory for Dotcom, a resident of the country who along with six associates is facing extradition to the United States to face charges that they conspired to infringe copyright, launder money and commit racketeering and fraud.

Dotcom can now appeal to the Supreme Court against a lower court's ruling in March that the U.S. Federal Bureau of Investigation does not have to hand over all of its evidence against the German national in its extradition bid.

His defence team has argued that withholding evidence puts Dotcom at a disadvantage in fighting the extradition case.

Washington has filed a 109-page case to have Dotcom sent to the United States, the contents of which are suppressed.

The United States began a criminal copyright case against Dotcom in January 2012, when New Zealand law enforcement officers acting on a request from Washington conducted a dramatic raid on his mansion outside Auckland.

An extradition hearing is scheduled for August, but may be delayed due to separate cases which have emerged after a New Zealand court last year found that New Zealand used unlawful warrants in his arrest and illegally spied on him in the lead-up to the raid.

The copyright case could set a precedent for internet liability laws and, depending on its outcome, may force entertainment companies to rethink their distribution methods.

Dotcom maintains that Megaupload, which housed everything from family photos to Hollywood blockbusters, was merely a storage facility for online files, and should not be held accountable if content stored on the site was obtained illegally.

The U.S. Justice Department counters that Megaupload encouraged piracy by paying money to users who uploaded popular content and by deleting content that was not regularly downloaded.

It said Megaupload cost copyright holders such as movie studios and record companies more than $500 million and generated more than $175 million in criminal proceeds. It called the case among the largest ever involving criminal copyright.

No arrest for posts on social sites without permission of senior police officials: Supreme Court
Panasonic launches P51 smartphone with quad-core processor and stylus for Rs. 26,900