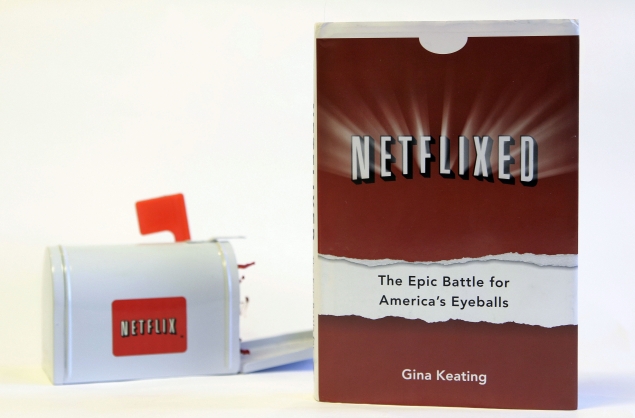 Netflix is probably hoping a new book about its early history never gets made into a movie.

The book, "Netflixed: The Epic Battle for America's Eyeballs," tries to debunk a widely told tale about the company's origins and paints a polarizing portrait of its star, CEO Reed Hastings.

Set to go on sale Thursday, the book arrives at a pivotal time for Netflix Inc. The video subscription service is still recovering from a customer backlash triggered by Hastings' hasty decision to raise U.S. prices by as much as 60 percent last year. Investors remain leery of Netflix as its expenses for Internet video rights steadily climb. That's the main reason Netflix's stock remains about 75 percent below its peak of nearly $305 reached right around the time Hastings announced the price increases 15 months ago.

The book, written by veteran journalist Gina Keating and published by the Penguin Group, draws its insights from interviews with Netflix's lesser known co-founder, Marc Randolph, and other former employees. It also depends on information from former executives at Blockbuster Entertainment, the once-dominant video rental store chain driven into bankruptcy by the rise of Netflix and Redbox's DVD-rental kiosks.

Hastings declined to be interviewed for the book.

Keating nevertheless illuminates the competitive gauntlet that Netflix had to navigate to get where it is today. The book also dishes up juicy morsels about various negotiations that could have reshaped Netflix.

According to the book, Hastings and Randolph flew to Seattle sometime in 1998 to meet with Amazon.com Inc. CEO Jeff Bezos. The topic of discussion: a possible partnership. At one point, Hastings proposed that Amazon buy Netflix, only to be disappointed when Bezos offered a mere $12 million.

The book asserts that the Amazon talks weren't the only time that Hastings flirted with a possible sale before the company went public a decade ago.

In the spring of 2000, Hastings and other Netflix executives flew to Blockbuster's Dallas headquarters where they tried to sell Netflix for $50 million, only to be told the price was way too high, according to the book. That was one of many miscalculations Blockbuster made in its rivalry with Netflix. Despite its recent downfall on Wall Street, Netflix still boasts a market value of $4 billion.

Blockbuster eventually built its own online DVD-rental service and began to hurt Netflix so badly that Hastings made an informal bid to buy his rival's roughly 3 million Internet subscribers for about $600 million, according to the book.

"People interpret history in all kinds of different ways, and a lot of the anecdotes in the book don't square with the way we remember them," Friedland said. "The gist of the story, that Marc and Reed created Netflix together, is correct."

Although the book sometimes casts Hastings in an unflattering light, Keating remains convinced he is the main reason that Netflix was able to transform home entertainment.

"I hope that people recognize he is a genius," Keating said in an interview with the AP. "There is no question in my mind that there is nobody like this guy. Wall Street and naysayers are wrong to bet against this company, especially as long as he is in charge."

The book captures Hastings' vision, focus, charisma and chutzpah - traits that helped him transform Netflix from a quirky service with fewer than 100,000 customers in the late 1990s into a cultural phenomenon with 30 million subscribers in the U.S., Canada, the United Kingdom and dozens of Latin American countries.

But readers also will be introduced to a cold-hearted side of Hastings that never surfaces in his public appearances, or the many interviews that he has done with reporters during his 14-year tenure as Netflix's CEO.

Viewed through Keating's lens, Hastings "seemed to lack an empathy gene." He is depicted as a brilliant mathematician who looks at almost everything as an equation to be solved. Once he's convinced he has figured out all the variables, Hastings never let compassion trump his logic, based on anecdotes in the book. In one scene, Hastings fires Netflix's first human resources manager in front of her coworkers' because he wanted to bring in a former colleague from his previous company, software maker Pure Atria.

Keating thinks Hastings' data-driven approach also makes it difficult for him to anticipate how Netflix subscribers will react to things like last year's price increases and the botched attempt to spin off the company's DVD-by-mail rental service into a separate company called Qwikster.

"He has one blind spot and that he just doesn't understand the consumer-facing aspects of the business," Keating said in the interview. "It's illogical the way consumers act, and I think it's frustrating for him because he is trying to do the best thing for customers. But he just doesn't understand that you can't dictate to them. They have to be ready to go at their own pace."

From Keating's vantage point, Hastings used a $2 million investment he made in Netflix's early day to muscle his way into the company's management and persuade then-CEO Randolph that they should share the top job. Eventually, Randolph was relegated to other management positions with fewer responsibilities and lost his spot on the board of directors.

Randolph, who now dispenses advice to entrepreneurs launching startups, left Netflix as a rich man after the company's initial public offering of stock in 2002. He owned nearly 840,000 shares worth about $12.5 million at the time of Netflix's IPO.

The book makes the case that Randolph never got the credit he deserved for coming up with the idea for sending DVDs through the mail - the concept that turned Netflix's red envelopes into a ubiquitous sight.

"Marc co-founded Netflix with me, was our first CEO, came up the name Netflix, and was instrumental in our success," Hastings said in a statement to the AP. Friedland said Hastings wasn't available to be interviewed for this story.

Randolph told the AP he remains on good terms with Hastings, even though they have different recollections of Netflix's early days.

"When we talk, it's like two friends reaching out and saying, 'We still cool, we still OK?'" Randolph said. "I still have tremendous pride and tremendous joy about what Reed and I accomplished."

Randolph's version of how Netflix began is much different than the story that Hastings used to tell media outlets, including the AP, about how the service started.

Hastings' spin went something like this The idea for a video subscription service came to him after a Blockbuster store hit him with roughly $40 in late fees when he returned a VHS tape of the Tom Hanks movie, "Apollo 13". A few years later, the story would be amended so the late fees were charged by an unnamed independent video store.

"That's a load of crap," Randolph says in the book. "It never happened."

The truth, according to the book, is that Netflix was born out of conversations that Randolph and Hastings had while they were carpooling to their Silicon Valley jobs at Pure Atria from their homes in the beach town of Santa Cruz, Calif.

Randolph, who was a marketing manager at Pure Atria while Hastings was the boss, had always been fascinated by the moneymaking potential of direct mail and started wondering how it might be combined with DVDs, a still nascent technology in 1997.

One day, while they were at a cafe in downtown Santa Cruz, Randolph and Hastings decided to test whether a DVD could make it through the U.S. postal system's processing equipment without being damaged. They couldn't find a DVD, so they bought a compact disc from Logo's Book and Records in Santa Cruz and an envelope from a nearby gift shop. They then inserted the CD into the envelope and mailed it to Hastings' home.

When they met for their commute a day or two later, Hastings showed Randolph that the CD arrived in the mail undamaged.

Randolph then spent months getting Netflix launched while Hastings attended Stanford University's graduate school and worked for a technology lobbying group. It sometimes bothered Randolph that his early work seemed to be forgotten, but he says he's over it.

"The people who I really care about know about my role in starting Netflix," Randolph told the AP. "Do I wish it would have been more accurately portrayed (in the company's history)? Of course, but not to the point where I was prepared to make a stink about it."