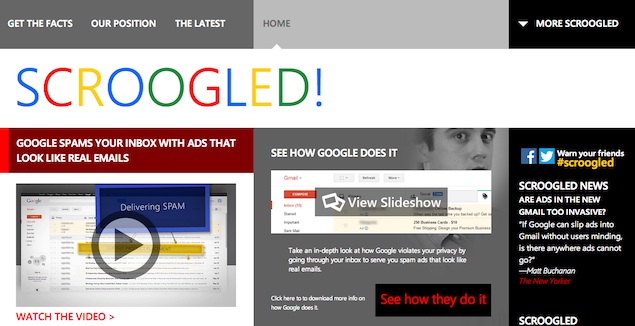 Firing a new salvo at Google, Microsoft is now accusing the Internet company of spamming users through its Gmail webmail service.

Microsoft has created a new page on its Scroogled.com website explaining how Google is spamming users by inserting ads in their inboxes instead of protecting them from spam. Microsoft has put a video and slideshow detailing how Google serves spam that looks like regular emails based on the user's other emails. Microsoft alleges that Google violates users' privacy by reading every single word of every single email sent to and from their Gmail accounts.

"Google violates your privacy by reading every single word of every single email sent to and from Gmail accounts so they can better target you with ads. Now, they're going one step further over the line by using that same personal information to spam your inbox with ads that look like real emails.

Your email provider should protect you from spam, but Google is doing just the opposite; they're reading your private email conversations and using what they find to push junk mail directly to your Gmail inbox."

Microsoft even puts quotes from media reports that pan Google on the issue. The quotes are from several publications including The Wall Street Journal, Time, The Atlantic and The New Yorker among others.

A section of the page offers 'Top moments in spam history', while the others feature a study on email privacy and spam and an infographic called "What does Google know about you?"

After it started offering a new tabbed interface for Gmail that allows users to sort their mails into different tabs on the basis of the content or senders, Google had also started serving advertisements disguised as emails in the 'Promotions' tab, in July.

The ads appear as highlighted messages in peach colour similar to how Google's related ads are listed in search listings. They also come with a message saying that "These ads are based on information from your Google account. Ads Settings puts you in control of the ads you see." This implies that ads are served on the basis of information from the user's Google account but Google doesn't clarify whether it also scans the users' emails to come up with targeted ads in the inbox.

However, Google defends itself by saying that users are looking for new promotions when they look for emails under the Promotions tab and that it's simply banking on that opportunity.

Google also said that the advertising partners do not have any more access to users' email address or personal information than they did before.

Microsoft started the Scroogled campaign in April through which it attacked Google with a series of ad campaigns. The ads, which have appeared online, on television and in print, depict Google as a duplicitous company more interested in increasing profits and power than protecting people's privacy and providing unbiased search results.
Comments