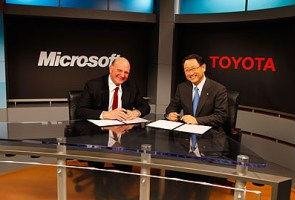 Highlights
Microsoft and Toyota Motor Corp. (TMC) on Wednesday announced they will work together to infuse the Japanese auto maker's cars with digital capabilities hosted in the Internet "cloud."

Navigation, energy management, and other "smart" features in the next generation of Toyota vehicles were to be built on Microsoft cloud-computing platform Windows Azure.

"Today's announcement... is a great example of how we continue to invest in the automotive industry and of our commitment to power the services that are important to consumers," said Microsoft chief executive Steve Ballmer.

"It further validates the power of the cloud, as the Windows Azure platform will provide the enterprise-grade, scalable platform that TMC needs to deliver telematics in its automobiles worldwide."

Toyota cars tapping into computer services hosted by Microsoft in the Internet "cloud" were to be electric and plug-in hybrid models to hit roads next year.

Toyota expected to have a "complete global cloud platform" in place by 2015.

Toyota is conducting tests in Japan of a Smart Center intended to connect people, homes, and cars in an energy management system using Internet technologies.

"Creating these more efficient, more environmentally advanced products will be our contribution to society," TMC president Akio Toyoda said in a release.

"To achieve this, it is important to develop a new link between vehicles, people and smart center energy-management systems."
Comments