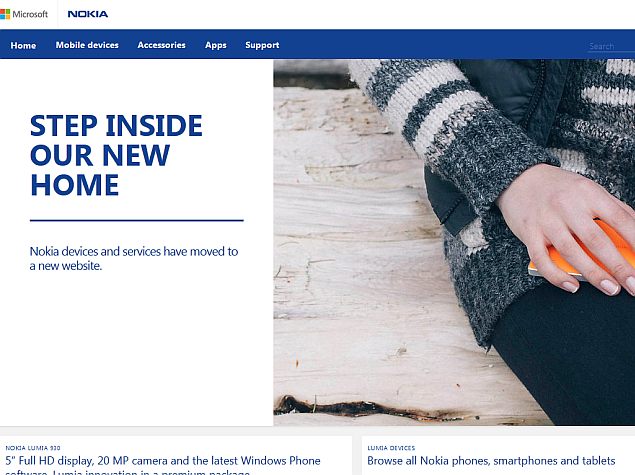 Microsoft is slowly disassociating the Nokia brand from its newly-acquired mobile devices group, and a step in this direction is the redirecting of users from the Nokia UK site to its 'new home', the Microsoft Mobile Devices page. It is expected that Nokia websites of other regions will soon follow.

The Nokia UK website now reads 'Step Inside Our New Home' written in bold letters with a caption that says 'Nokia devices and services have moved to a new website,' linking to the main Microsoft Mobile Devices UK page. Users are automatically navigated to the corresponding Microsoft page on clicking anywhere on the Nokia UK website.

We've moved to a new home! Everything you need to know about #Lumia is here now: http://t.co/IVlf3xiBbQ :) pic.twitter.com/0Z7QgJuhJK

Of course, the Nokia that was not acquired by Microsoft, and now now operates mapping, networks, and telecommunications businesses, can be found at company.nokia.com.

Last week's report hinted Microsoft's plans to drop the 'Phone' from the Windows Phone name and logo as part of the transition to the unifying 'Threshold' Windows 9 update.

In addition, the recently launched Nokia Lumia 730 Dual SIM, Lumia 830 and Lumia 735 are also said to be the final devices carrying the 'Nokia' brand name.

Earlier this week, a purported image showed the back panel of a phone with just 'Windows' printed on it along with the logo.

As per the report, a British smartphone manufacturer called My Go, which is working on its first Windows Phone called GoFone GF47W, revealed the new branding for Windows smartphone on its microsite marked as "Confidential Internal Use Only" in big bright red letters on top.