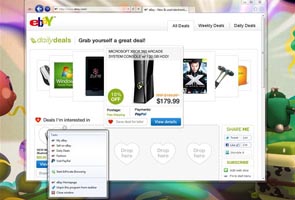 "Things are about to change," Microsoft corporate vice president Dean Hachamovitch said at a press conference at the South By Southwest Interactive technology festival in Texas. "We took a dramatically different tack."

Internet Explorer 9 (IE9) is available for download in 30 languages at beautyoftheweb.com.

"It's a really good day for the Web," Hachamovitch said.

IE9 is built to make the most of Microsoft's latest operating system, Windows 7, as well as graphics processing chips that can power videos, games, graphics and other stunning visuals.

"We have worked with partners reaching a billion active Internet users," Hachamovitch said. "All of these partners are using IE9 to make a more beautiful Web, starting today."

More than 40 million copies of IE9 have already been downloaded as part of the process leading up to its official release, according to Microsoft.

Microsoft showed off a lean, muscular new Internet Explorer crafted to spotlight slick websites and beat back competition from Firefox and Google in the Web browser arena.

A laptop powered by Windows and using IE9 smoothly zipped through cascading images illustrating top tunes while the opposition slowly worked its way along.

"The Web as we know it is taking a huge step forward today," Bixhorn said.

While Microsoft doesn't charge separately, the browser is included with Windows software and it is in the technology giant's interest to keep users happy and devoted to its products.

"A browser is important to Microsoft because browsing is the top activity people do on their PCs (personal computers)," Hachamovitch said. "We want browsing the Web to be a great experience so people keep choosing Windows to do it."

Windows operating systems are at a core of Microsoft's software empire. The Redmond, Washington-based technology colossus claims more than one billion Windows customers.

Microsoft seems to have hit the mark with IE9, according to analysts.

"The browser is the stage and the websites are the stars of the show," Hachamovitch told AFP during an earlier demonstration.

Once a website is reached, the browser seems to step out of the way and almost vanish to spotlight the content.

IE9 promised to be another hit release for Microsoft, which has seen market successes with Windows 7 operating system and a Kinect motion-sensing controller accessory for Xbox 360 video game consoles.

Open-source browser Firefox had been gnawing away at IE's dominance, but that eased as a new rival arrived in the form of Chrome by Internet titan Google.
Comments