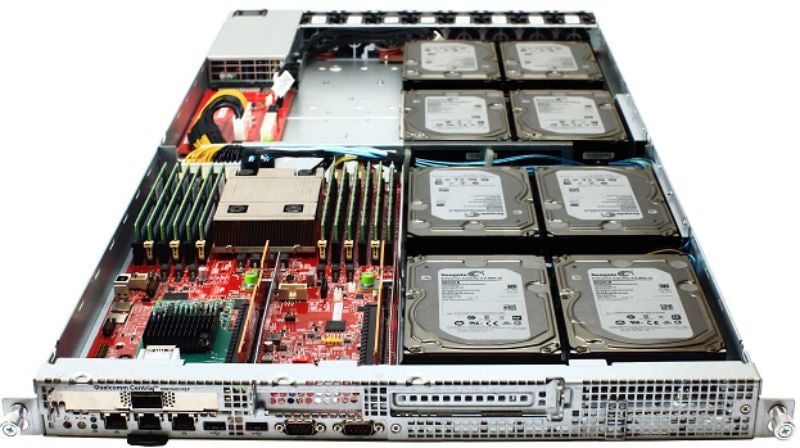 Microsoft has announced that it has been working with Qualcomm and Cavium to bring support for ARM chips to Windows Server OS, and it demoed the first version at the Open Project Compute Summit being held in Santa Clara, California, this week. This particular server runs on the Qualcomm's 10nm Centriq 2400 and Cavium's flagship second generation 64-bit ThunderX2 ARMv8-A server processor- both especially designed ARM-based chips meant for cloud servers.

This announcement looks to threaten Intel's premier position in server chips, and brings to light the much-discussed power efficiency of ARM-based offerings. As PCWorld notes, Intel currently enjoys a 90 percent share in the market, and the server chips vertical is the most profitable for it, what with the demand for smartphone chips decreasing. Also, until now, Microsoft used Intel x86 processors in all its data centres, and now it looks to use ARM server processors as well. This internal Windows server build will bear the workload of search and indexing,e in upcoming cloud services at the consumer end as well. storage, databases, big data, and machine learning for now. The company also does not rule future use in upcoming cloud services at the consumer end as well.

Microsoft claims that the ARM server processors are found to be "more economically feasible to optimise the hardware to the workload instead of the other way around." Microsoft engineer Leendert van Doorn notes in the company's blog, "We feel that ARM is well positioned for future ISA enhancements because its opcode sets are orthogonal. For example, with out-of-order execution running out of steam and with research looking at novel data-flow architectures, we feel that ARM designs are much more amenable to handle those new technologies without disrupting their installed software base."

While this move might be beneficial for Microsoft, the relationship with Intel goes way back with Wintel (Windows and Intel) being a synonymous name on the PC platform for years now, Ars Technica notes. There has seldom ever been a Windows build that has been successful without an Intel chip, however, ARM's popularity may look to change the tide. At the Summit, Intel did its own bit of showing off with the new Skylake chips for the Project Olympus servers. Notably, Google is using these chips for its cloud services.

Separately, Microsoft also confirmed that it is working with AMD using the company's new Zen core in the forthcoming Naples processor which is a 32-core, 64 thread system-on-chip with huge I/O bandwidth from its 128 PCIe lanes.

In December last year, Microsoft and Qualcomm had also announced that Windows 10 will get support for ARM chipsets, specifically, Qualcomm's Snapdragon SoCs. The first of these devices should arrive "as early as next year", the two companies revealed. This will enable hardware manufacturers to create portable devices like laptops, tablets, and even smartphones with support for desktop Windows apps (and games).