With the new offering, the company wants to attract new business users to its cloud storage technology. Also as a standalone product, it will likely compete with existing services like Dropbox and Box. The new OneDrive for Business provides similar file sync, sharing, and storage services like others.

The company is also promising new features on the horizon, such as advanced auditing and reporting features, encryption at rest, data loss prevention (DLP), extensibility improvements, even higher storage limits, and more. Microsoft says its long term goal is to make deeper cross-Office 365 experiences, and position OneDrive for Business as the "best file, sync, share, and collaboration solution available". 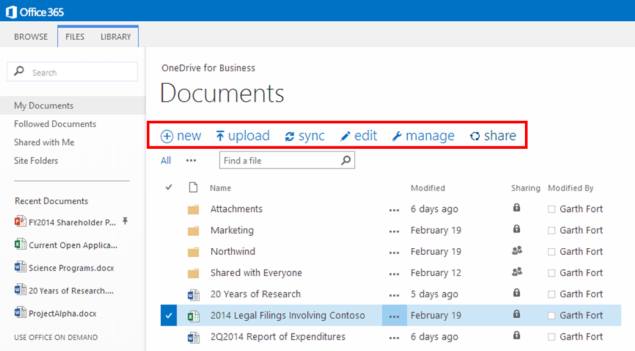 Microsoft is initially offering the OneDrive service to business users at a 50 percent discount to regular charges for a limited period of time. From April through to September, the service will be available at $2.50 per month per user for all licensing agreements and programs.

Also every user will receive 25GB of online storage and Office Online as part of the plan. Further adding another 50GB will cost $25 per year, 100GB for $50 or 200GB for $100. For existing Office 365 ProPlus agreements the price will only be $1.50 per user per month. Microsoft also says OneDrive for Business is also available in (and included with) most Office 365 and SharePoint Online plans at no additional cost.

"Not only is OneDrive for Business a simple and intuitive file sync and storage solution for employees, it's a trusted service that provides enterprise-grade content management, compliance, and administrative controls, and it is financially backed by the industry-leading Office 365 Service Level Agreement," said Julia White, the General Manager of Office in a blogpost.