OneDrive announced the news on Thursday via its official Twitter handle and said, "Drop the box - move your photos, music, and docs to #OneDrive and get 100 GB for one year free." The tweet clearly took digs at Dropbox users and asked them to switch to OneDrive. Microsoft's OneDrive bonus page includes a tagline that says, "A gift to current Dropbox users for installing OneDrive." 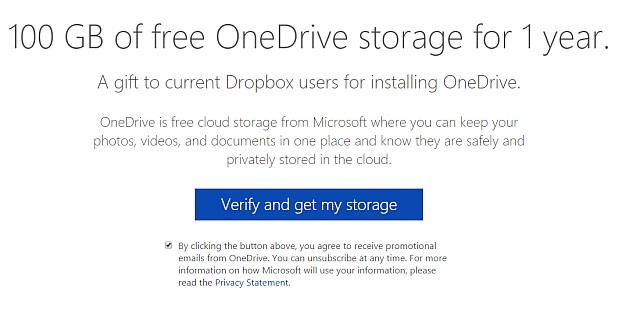 Dropbox users who wish to avail the free OneDrive storage can go to the bonus page to redeem the 100GB storage. The page will first verify both OneDrive and Dropbox accounts of a user. Once the sign-in process is done, OneDrive will request to add a "Getting Started with OneDrive" PDF file to the user's Dropbox folder. Once the PDF file is added to the user's Dropbox account, the page will redirect to confirmation page that reads, "Your bonus storage was successfully applied!" The free 100GB cloud storage is added as "Enthusiast bonus" to the user's OneDrive account. NDTV Gadgets checked the offer and it is now available for users in India, so get your free 100GB of OneDrive storage.

Along these lines, Microsoft started offering 100GB of free OneDrive cloud storage to its US consumers for two years earlier this month. The company has reportedly expanded the promotional offer however, and is offering 100GB of free cloud storage via Bing Rewards program to users outside the US. Unfortunately, it appears the promotional offer is not, or no longer available for users in India. NDTV Gadgets, after going through the process, discovered users are redirected to a Bing page that notes, "Bing Rewards isn't available yet in your country or region."

In other news, OneDrive on Thursday in a blog announced that it turned one. OneDrive's Omar Shahine, Group Program Manager, said, "We've been working hard to make OneDrive the one place for all of your files - including photos, videos, and documents - available across the devices you use every day for work and life."