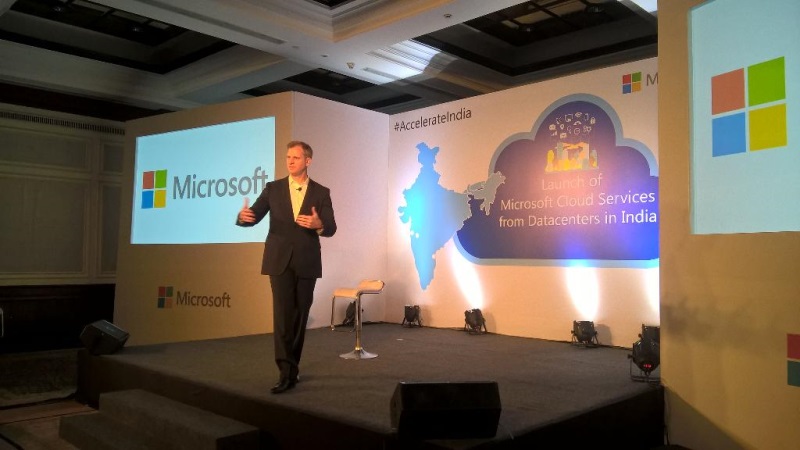 As part of the new launch, Microsoft will inaugurate three data centres - Chennai, Pune and Mumbai - in the country. The new centres will start operations after the facility is inaugurated by the respective state chief ministers - J Jayalalithaa and Devendra Fadnavis - on Tuesday.

"More organisations and governments will adopt the public cloud which will open up more opportunities for Microsoft," he added explaining the launch.

The Tamil Nadu government in a release said it had signed a Memorandum of Understanding (MoU) with Microsoft at the recently-concluded Global Investors Meet held in Chennai.

As per the MoU, Microsoft India will offer entrepreneurs selected by the Tamil Nadu government its software development platform free of cost for three months. The company will also train the entrepreneurs on cloud computing and mobility technology.

"We welcome you to the state and I assure you of the full support of the government of Tamil Nadu," Jayalalithaa told Microsoft India's managing director Karan Bajwa who was present at the inauguration.

Meanwhile, Fadnavis said: "This launch is a milestone which has taken the mission of Digital India and Digital Maharashtra to the next level... The good part about these data centres is that they are within the geographical boundaries of our country and takes utmost care of security."

This would not only add strength to our endeavours to provide digital services but help promote Mumbai as an International Financial Services Centre, he added.

The research firm also said that more than 60 percent of all banks will process majority of their transactions on the cloud.

A public cloud is based on the standard cloud computing model, in which a service provider makes resources, such as applications and storage, available to the general public over the internet. Public cloud services may be free or offered on a pay-per-usage model.