Messages for Web Now Available on Google.com, Gets RCS Settings 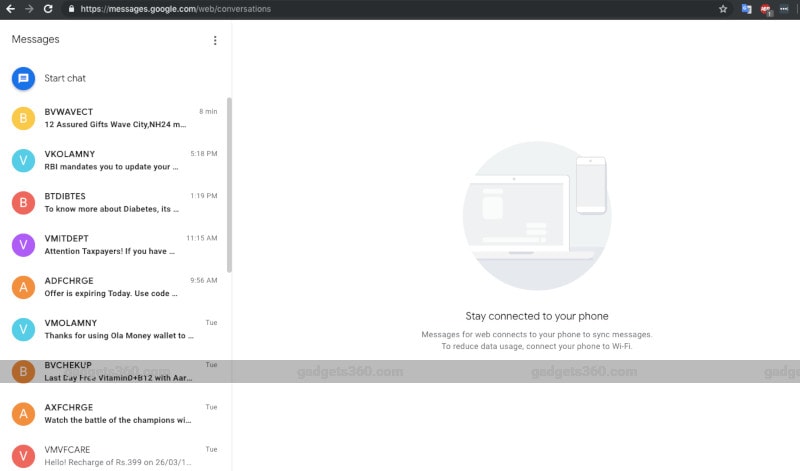 Messages for Web continues to be available on the Android.com domain for the time-being

Google's Messages for Web has finally made its transition from Android.com domain to Google.com domain. Although Messages for Web continues to remain accessible via messages.android.com, the access is also live via messages.google.com. With the move to new domain, Google has also added Rich Communication Services (RCS)-related settings on the Web app. This move is said to be part of Google's plan to minimise the reliance on Android branding and for the same, Google had recently changed the name of the Android Messages app to just Messages.

First spotted by a Reddit user, the Messages Web app is now accessible at messages.google.com/web. Being a server-side change, the Web app isn't redirecting for everyone just yet, but the rollout is expected to complete soon. For the uninitiated, Messages is Google's official app for SMS, MMS, and RCS (chat), apart from being a competitor to Apple's iMessage. A successor to Google's Messenger, it was called Android Messages for some time. Messages supports RCS, the next-generation messaging standard supported by a group of carriers and Google. It offers multimedia messages, read receipts, and other features that are available in a normal chat app like WhatsApp Messenger or iMessage.

As we mentioned earlier, the Google has added a new Advanced section in the Messages for Web settings, which includes options related to RCS. These options related to read receipts, typing indicators, and enabling or disabling RCS. Also, the Settings menu had now gotten its own webpage rather than a dialogue.

Google had announced last month on the sidelines of the Mobile World Congress that it is bringing the Assistant to Messages. According to the company, Assistant integration in Messages will show suggestions so you can get more information from the Google Assistant about movies, restaurants, and weather.