Merriam-Webster Adds 'Sheeple' as an Official Word; Lists Apple Fans as an Example

One of America's bestselling dictionaries, Merriam-Webster, has added 'Sheeple' as an official word. The announcement was made last week, and adds that 'Sheeple' is an informal word to describe "people who are docile, compliant, or easily influenced: people likened to sheep." Interestingly, Merriam-Webster dictionary lists Apple fans as prime examples. The usage clearly takes a pot shot at Apple fans who are believed to be avid followers of the brand and its products.

It defines the word with an example that says, "Apple's debuted a battery case for the juice-sucking iPhone-an ungainly lumpy case the sheeple will happily shell out $99 for." For the origin and etymology of 'Sheeple' word, the dictionary says that it's a blend of sheep and people. It also claims that the word's first known use was in 1945. Notably, the example sentence has been taken from CNN's Doug Criss back in 2015. 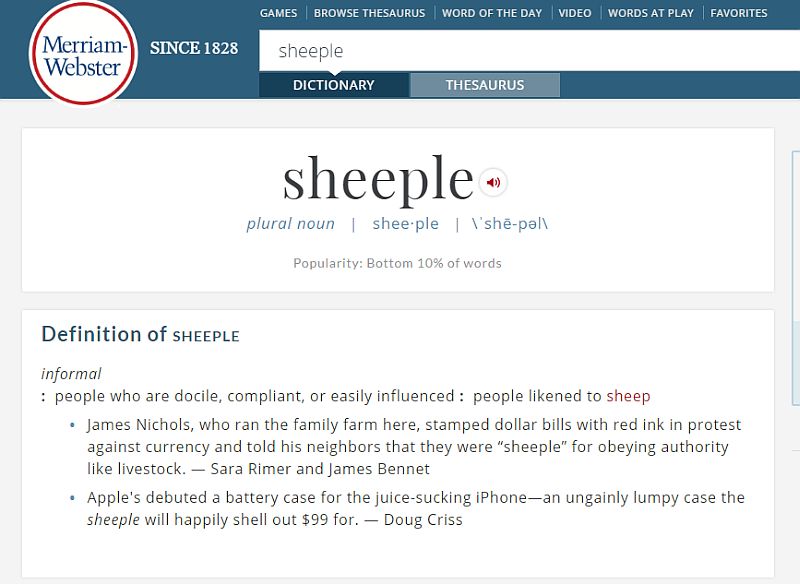 Announcing the addition, Merriam-Webster in a tweet wrote, "Wake up! 'Sheeple' is in the dictionary now."

Another example listing for 'Sheeple' by Merriam-Webster says, "James Nichols, who ran the family farm here, stamped dollar bills with red ink in protest against currency and told his neighbours that they were "sheeple" for obeying authority like livestock."

Back in 2014, "Selfie," "hashtag," and "tweep" were among over 150 new words added to Merriam-Webster dictionary, that were claimed to be spotlighting the growing influence of technology on everyday life. Selfie was declared word of the year in 2013 by Oxford.