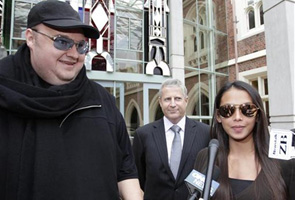 Kim Dotcom, the Internet tycoon at the centre of a U.S. investigation into online piracy and fraud, said on Wednesday he was willing to go to the United States to clear his name, offering to forego a pending extradition hearing in New Zealand.

Dotcom, the founder of the Megaupload file-sharing site, challenged the U.S. Federal Bureau of Investigation to a fair trial, and said he was willing to face them in court in the United States if they agreed to certain conditions.

"Hey DOJ (Department of Justice), we will go to the US. No need for extradition," Dotcom, the 38-year-old German national, who also goes by Kim Schmitz, posted on Twitter.

"We want bail, funds unfrozen for lawyers & living expenses," he added, referring to himself and three others facing the U.S. charges.

In its highest-profile investigation into online piracy, the FBI alleges that Dotcom led a group that has netted $175 million since 2005 by copying and distributing music, movies and other copyrighted content without authorisation.

Dotcom's offer comes a day after a New Zealand court delayed a hearing into the U.S. extradition request until March next year because of ongoing legal hearings related to the search and seizure of evidence by the United States.

The New Zealand High Court in June ruled that search warrants used by police to search the flamboyant Dotcom's mansion to collect the evidence were illegal. The court also ruled that the FBI's copying of evidence and sending it to the United States was also unlawful.

Acting on a request from the FBI, New Zealand armed police, backed by helicopters, swept into Dotcom's rented estate outside Auckland in January, confiscating computers and hard drives.

Dotcom and the three others were arrested, and Dotcom was kept in custody for a month before being granted bail.

New Zealand courts have progressively eased restrictions on him, allowing him back into his mansion, giving him access to hundreds of thousands of dollars for living and legal expenses, and removing some travel and meeting restrictions.

Dotcom told a local paper that U.S. authorities already know they cannot win the case against him, but his legal bills are mounting up into "millions of dollars", which he cannot pay because of a freeze on much of his fortune and assets.

"I have accumulated millions of dollars in legal bills and I haven't been able to pay a single cent," he told the New Zealand Herald on Wednesday.

"They just want to hang me out to dry and wait until there is no support left."

He is increasingly using Twitter to keep his followers abreast of every twist and turn in his complicated case, while also posting photos of family birthdays and praising his legal team.