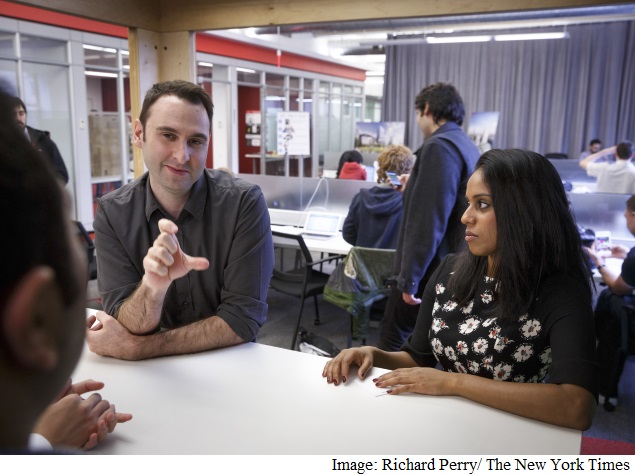 Greg Pass, the former chief technology officer of Twitter, put the matter succinctly. The MBA, he observed, is "a challenged brand."

That's because the degree suggests a person steeped in finance and corporate strategy rather than in the digital-age arts of speed and constant experimentation - and in skills like A/B testing, rapid prototyping and data-driven decision making, the bread and butter of Silicon Valley.

Those skills are not just for high-tech startups. They are required now in every industry. And leading business schools are struggling to keep pace.

Pass is on the faculty at Cornell Tech in New York, where an innovative new program brings MBA candidates and graduate students in computer science together. Meanwhile, across the country, colleges are adding new courses in statistics, data science and A/B testing, which often involves testing different web page designs to see which attracts more traffic.

Business plan competitions have become common. Students' ideas usually have a digital component - websites, smartphone apps or sensor data - and prizes are up to $100,000 or more. Innovation and entrepreneurship centers have proliferated. Dual-degree programs, with a science or engineering degree added to an MBA, are increasing.

Graduate business schools have picked up the digital ethos of experimentation and new ventures. At the Stanford Graduate School of Business, 150 elective courses are offered; 28 percent of those did not exist last year.

"We're responding to the best practices we see in the outside world like A/B testing and working with massive data sets," said Garth Saloner, dean of the Stanford business school. "We're adapting."

So are the students. Once, students who had professional experience with computer programming were rare at business schools. Today, David B. Yoffie, a professor at Harvard Business School, estimates that a third or more of the 900 students there have experience as programmers, and far more of them have undergraduate degrees in the so-called STEM disciplines - science, technology, engineering or mathematics.

"There's been an extraordinary change in the talent pool," Yoffie said.

Yet lately, many talented young people who might have gone to business school in the past are looking elsewhere. Applications to business graduate schools fell by 1 percent in 2013, the most recent statistics, reports the Council of Graduate Schools. By contrast, applications for computer science and mathematics graduate programs increased by 11 percent.

"Business schools are a legacy industry that is trying to adapt to a digital world," said Douglas M. Stayman, associate dean at Cornell Tech.

Stayman describes the school's MBA program in New York as a startup of its own, unencumbered by tradition.

"Our starting assumption here is that a new kind of education is needed for managing in a digital economy, where speed and integration have to occur at a different level than in the industrial economy," he said.

Their joint work includes projects for New York businesses including banks, hedge funds, larger technology companies and startups. They work in small teams, and typically design and write software programs for the companies. The emphasis is on making things rather than planning.

On Tuesday afternoons, the students gather for "studio" sessions, where they sit in circles of chairs, give progress reports, discuss problems and get critiqued by faculty and outsiders. Until 2017, when it begins moving to its campus being built on Roosevelt Island, Cornell Tech resides in one of Google's buildings in downtown Manhattan.

The aim of Cornell Tech is to train what its faculty calls "entrepreneurial, technology product managers," which are needed across industry as digital technology spreads.

The students selected are not typical of MBA classes. About 75 percent have STEM undergraduate degrees, Stayman said, while the comparable share is about one third at Cornell University's Johnson Graduate School of Management in Ithaca, New York.

Amanda Emmanuel, 28, is fairly representative of the business students at Cornell Tech. At Carleton University in Canada, she majored in computing and design, and she had summer internships as a software engineer for General Dynamics. But she also started her own fashion business, which used her software algorithms to create figure-flattering clothing designs.

Emmanuel came to Cornell Tech to burnish her business skills in a technology-rich environment. The Cornell program, which costs $93,000 (roughly Rs. 58 lakhs), lasts one year instead of the traditional two-year MBA curriculum - another plus for Emmanuel.

"Saying you're going to be out for two years can be a big drawback," she said. "Some of the companies for the target jobs we're looking for didn't exist two years ago."

Pass holds the title of chief entrepreneurial officer at Cornell Tech, and he leads studio sessions, critiques projects and acts as a coach. At Twitter, Pass was part of a huge commercial success and, afterward, he says he felt "realistic guilt," holding a winning ticket in the lottery of start-up capitalism.

A graduate of Cornell, where he majored in computer science, Pass, 39, said he wanted to "give something back to the community." Something he figured he could provide was perspective, including his belief in the need for a "balanced culture," especially in tech companies and start-ups.

Engineers may be the most valued asset in business today, but the engineering mentality has its weaknesses, Pass noted. Engineers, he said, tend to be problem solvers, one step at a time, solving the problem in front of them.

"But the major business issue, especially for entrepreneurs, is often that problems are not known, need to be discovered or defined in a new way," Pass said. "You need a more integrated, broader view of things."

The MBA program, he said, is trying to nurture people with those wider horizons, technical know-how and quick business reflexes - "a new pivot on graduate education," as he put it.