Mark Zuckerberg Meets the Pope; Gifts Him a Drone Model 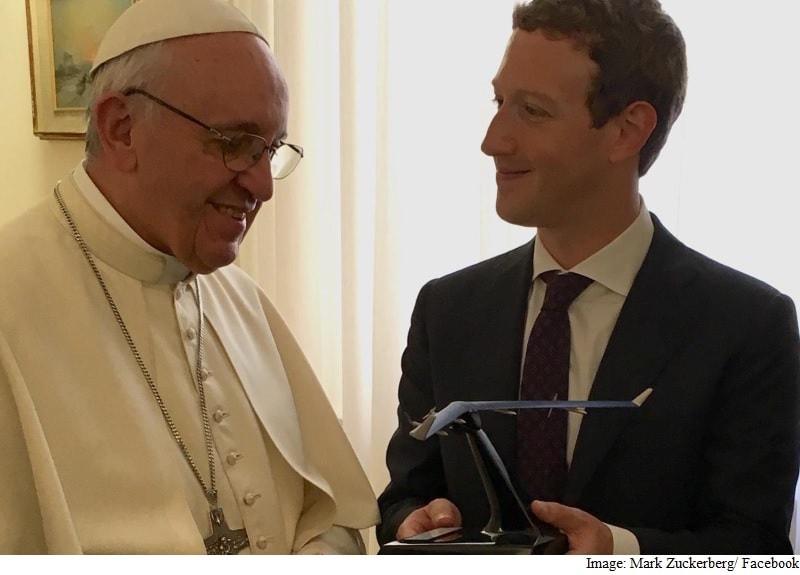 What would you possibly expect from a meeting between the Pope Francis and Facebook CEO Mark Zuckerberg? The idea of a meeting between the modern tech innovator and the leader of the Catholic Church itself is intriguing enough to a point that you would love to know every word of their entire conversation. Zuckerberg didn't fail to embrace the bizarreness of the situation where two opposite worlds met each other, offering a model of a drone to the Pope.

Mark Zuckerberg offered a miniature model of his solar-powered drone Aquila, which is supposed to beam Internet connectivity to places without it, to Pope Francis. In a post on his social networking website, he said, "We (Mark and wife Priscilla) told him (Pope Francis) how much we admire his message of mercy and tenderness, and how he's found new ways to communicate with people of every faith around the world."

The Facebook CEO further said that he and wife Priscilla talked with the Pope about Internet connectivity and its requirement in various parts of the world.

Interestingly, Pope Francis already uses Twitter and Instagram in order to reach the younger audiences and profess his religious teachings to them. If more people get Internet connectivity, more people will be able to hear what the Pope has to say about various global issues and effectively serve his purpose as well.

Last month, Facebook announced that it completed its first successful test of its solar-powered drone Aquila, which has been developed to deliver Internet service to remote areas of the world.