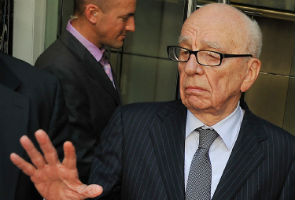 The tabloid quickly took down reports that the 80-year-old had been found dead in his garden after ingesting palladium but visitors to the site were redirected to LulzSec's Twitter feed, which celebrated the high-profile attack.

The group also claimed to have hacked the homepage of the phone-hack scandal hit News International, the Sun's parent company, and the webpage of sister paper The Times was also inaccessible.

"We have owned Sun/News of the World - that story is simply phase 1 - expect the lulz to flow in coming days," a message from the group warned.

Another message taunted "We have joy we have fun, we have messed up Murdoch's Sun"
A News International spokeswoman said the company was "aware" of the attack.

The hacker collective said it was "sitting on their (the Sun's) emails" and was prepared to publicise them on Tuesday.

Lulz has been in the spotlight after taking credit for cyberattacks on high-profile companies including Sony and Nintendo.
Comments

Will rivals do to Google what Facebook did to MySpace?
Google Plus: The Final Frontier For Captain Kirk