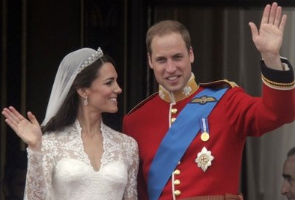 Highlights
Prince William and Kate Middleton may have had a traditional wedding, but the Internet traffic that accompanied the ceremony was something very new for the royal family.

Millions followed the affair in live streams on their computers, all the while commenting on social media sites. Among the many outlets webcasting the event was the royal family itself, whose YouTube page offered live video and tweets from Clarence House, the prince's official residence.

Akamai Technologies Inc., which delivers about 20 percent of the world's Internet traffic, said that global page views for the roughly 100 news portals for which it delivers content peaked at nearly 5.4 million a minute Friday morning. That was good enough for the sixth largest amount of traffic ever, but well shy of the record of 10.4 million page views a minute set last June 24 during the 2010 World Cup.

Still, those numbers were very high considering that the wedding was so ubiquitous on TV and that it occurred (unlike the World Cup record day) when many people in North American and the United Kingdom were not at work, where computer-viewing is often a necessity. Friday was a national holiday for the U.K., and the ceremony took place early morning in the U.S.

There was some evidence, though, that the wedding may have been live-streamed in record numbers. Because it was streamed on so many outlets, a total figure was hard to come by. Akamai said that based on the approximately 25 broadcasters for which it delivered streams, the highest viewer count exceeded that of the World Cup traffic it supported.

Livestream, which partnered with The Associated Press, UK Press Association, CBS and Entertainment Tonight for its live stream, said it surpassed its own record with, at one point, more than 300,000 concurrent live streams.

Yahoo said it experienced its largest traffic for a live video event, surpassing its audience for Michael Jackson's funeral by 21 percent.

Facebook said that more than 6.8 million people globally commented on the wedding through public status updates within the past 24 hours, as of Friday afternoon. On the social media site in the U.K., David Beckham's arrival prompted one of the largest surges in discussion with 9,000 mentions of his name in 20 minutes.

All the traffic caused some problems.

The BBC said in a statement that it was "experiencing some technical issues with BBC Online due to the sheer weight of traffic which may cause the site to be slower than normal in some cases."

The wedding day online audience was a culmination of rising Web traffic. There were 2.1 million tweets about the wedding over the last week. Google said that in the month of April, searches for "royal wedding" increased 90 percent. On April 25, searches on Google for "Kate Middleton" overtook those for "Lady Gaga." And on eBay, some 3,000 items related to the wedding were sold in April.
Comments