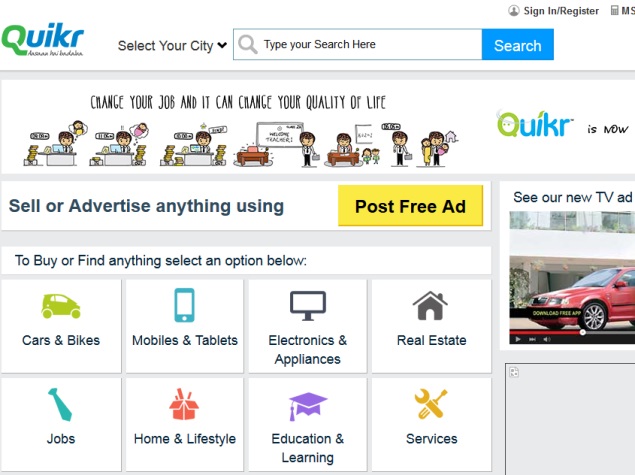 Quikr was valued at $1 billion (roughly Rs. 6394 crores) earlier this year in an index of venture-backed private companies that includes tech unicorns like Flipkart, Ola Cabs, InMobi, Snapdeal, One97 Communications and Zomato Media.

"The  size  of  the  transactions, approximately 6 percent of the company's diluted share capital, is considered sufficiently large to be applied to Kinnevik's entire shareholding in Quikr. The  valuation  of  Quikr  has  been  based  on  the  value implied  by  transactions  made  in  secondary  Quikr  shares with  various  preferential  rights  in  July  2015 at $900 million," Kinnevik's Q2 2015 regulatory filing states.

"In July 2015, Kinnevik acquired an additional $20 million interest in Quikr through a secondary share purchase which resulted in Kinnevik becoming the largest shareholder in Quikr. The purchase is consistent with Kinnevik's goal of owning more of its highest potential companies and reflects the continued progress of Quikr in what remains an exciting market," the filing added.

(Also see: OLX and Quikr battle it out to be India's Craigslist)

"It shows the depth and maturity of not just our business but also of the Indian internet industry. A secondary deal of this nature demonstrates that there are multiple shareholders - outsiders as well as insiders - who want to buy shares of the company even when the company itself doesn't need more capital. Hence it shows the capital efficiency as well as attractiveness of a business. Further, this deal also enabled us to bring to India some investors that have never invested in the country before." reads Quikr's official statement mailed to NDTV Gadgets.

Launched in 2008, Quikr launched as an online classifieds website and was previously a subsidiary of eBay. According to Kinnevik's website, the platform has over 30 million unique users from 940 Indian cities. The firm was in the news earlier this month when rumours of a buyout of Housing.com did the rounds, a deal that would have catapulted the startup to the billion dollar unicorn club.