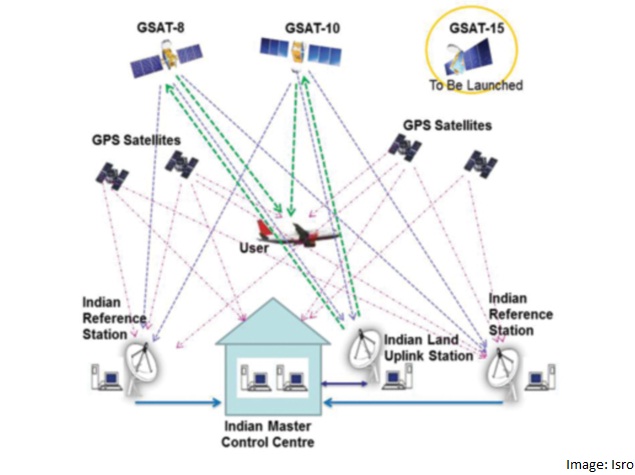 India on Monday launched its satellite-based air navigation services, thereby joining a select league comprising the US, Europe Union (EU) and Japan which have similar systems.

Civil Aviation Minister Ashok Gajapati Raju dedicated the services to the nation in a ceremony in New Delhi.

Gagan works by augmenting and relaying data from GPS satellites with the help of two augmentation satellites and 15 earth-based reference stations.

The process corrects any anomalies in the position data and gives accurate routes, landing guidance and time saving information to the pilots.

"It took 15 years to achieve this feat. When Indians work as a team they deliver. Now the need is to spread the word about the potential uses of this system," Raju said.

"We will reach out to the end users, other government departments and even the neighbouring countries which can use this system."

A.S. Ganeshan, project director, Gagan, Isro Satellite Centre said: "At any given time there are 10-11 GPS satellites over India. The GPS co-ordinates are useful but not always accurate."

"The augmentation satellites with Gagan payload and the earth reference stations gives us a clear and more accurate data for navigation and other purposes," Ganeshan elaborated to IANS.

The system utilises the satellite-based wide area augmentation system (SBAS) technology which has been developed by Raytheon.

Gagan has been jointly developed by the Indian Space Research Organisation (Isro) and Airports Authority of India (AAI). The system has been completed in 15 years at a total cost of Rs.774 crores.

It is intended to serve as a low-cost substitute for instrument landing system (ILS) and provide very accurate route guidance for the aircraft to save time and fuel.

Fuel cost is a major consideration in the Indian aviation scenario as 45-50 percent of total cost is dependent on it.

Fuel in India is nearly 50-55 percent costlier than in other neighbouring countries like Singapore or Dubai due to the addition of state levies ranging from 3-35 percent.

The technology has one major drawback that only those aircraft that are fitted with SBAS will be able to use the new technology.

Cost of refurbishing aircraft with new equipment and downtime for electronic restructuring are expenses that the financially-stressed Indian airline industry does not seem comfortable having to bear.

However, the Directorate General of Civil Aviation (DGCA) has made it clear that the new system will not be forced upon the airline industry.

"There are compatibility issues. But we have left it to the industry to decide on whether to use the new system or not," M. Sathiyavathy, director general of DGCA said on the sidelines of the event.

Meanwhile, AAI has proposed that smaller aircraft can adopt the new technology and that acquisition norms can be made in such a way that promotes the usage of such a system.

"To begin with smaller aircraft can be retro-fitted to use the system. Aircraft acquisition guidelines can also be made in such a way that new technology-enabled planes are bought," S.V. Satish, general manager, air traffic management-Gagan, AAI informed IANS.

The system and its benefits will be displayed by the AAI to neighbouring countries during a meeting of Arabian Sea, Bay of Bengal and Indian Ocean countries to be held in New Delhi from August 31 to September 4, later this year.

Isro will also hold an end-user summit where it will display the system to other industries in September.

"We would like the system to spread to other neighbouring regions like Asean. The system current can be expanded to 45 earth reference stations," Nik Khanna, country director, Raytheon India, told IANS.