Indelible Ink Removal Searches on the Rise After Demonetisation-Related Steps

Google searches for the query 'indelible ink removal' have soared since banks started using the ink to prevent multiple exchanges by people as an after-effect of the demonetisation of Rs. 500 and Rs. 1000 notes. Banks had been told to use indelible ink, which is usually used in elections to mark people who have cast their votes, to make sure no one lines up in the bank to exchange cash on behalf of others.

This comes within days of searches spiking for the phrase 'how to convert black money to white money' on Google after Prime Minister Narendra Modi announced that Rs. 500 and Rs. 1000 notes will not be accepted as currency in the country as a move to curb black money circulation. It now appears indelible ink removal is foremost on people's minds.

The rise in searches for 'indelible ink removal' started on November 15, the day banks started using the ink on customers, shows Google Trends data. Delhi, Karnataka, West Bengal, and Maharashtra are the states leading the country in looking up indelible ink removal methods. Almost the same amount of searches originate from Mumbai and Delhi, followed by Bengaluru, according to the data. 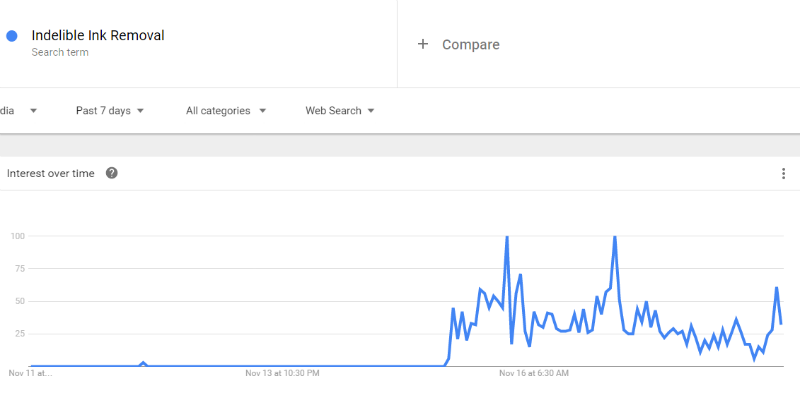 Banks have been advised to apply the indelible ink of the right hand to mark customers who have made their transactions, since the ink is used on the left hand of voters to prevent impersonation and voter fraud. As should be obvious, the fraud prevention method has been used for this purpose in the past as indelible ink removal is not a simple task.