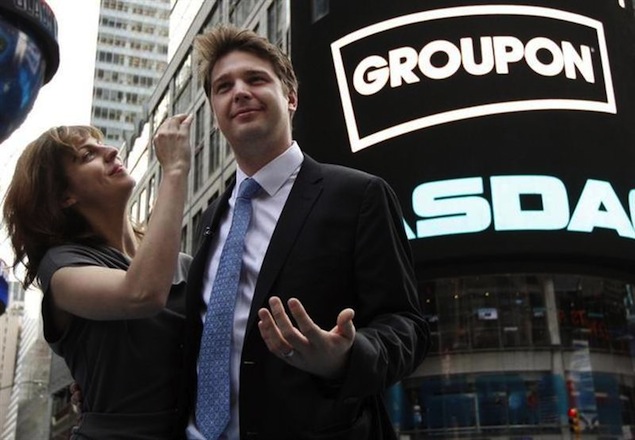 Groupon Inc fired Andrew Mason as Chief Executive Officer on Thursday, ousting a co-founder who captured headlines with his quirky style but failed to reverse a crumbling share price or stop a gradual erosion of its main daily deals business.

The leader in Internet daily deals launched a search for a new leader to turn the company around, the same day its stock slid 24 percent after a dismal quarterly results report.

In an unusually candid post-firing letter, Mason - known for his atypical sense of humor - confessed he was getting in the way of the company he co-founded just a few years ago, and had failed in his role as leader.

"After four and a half intense and wonderful years as CEO of Groupon, I've decided that I'd like to spend more time with my family. Just kidding - I was fired today. If you're wondering why... you haven't been paying attention," Mason wrote in a memo addressed to the People of Groupon and made available to Reuters.

"From controversial metrics in our S1 to our material weakness to two quarters of missing our own expectations and a stock price that's hovering around one quarter of our listing price, the events of the last year and a half speak for themselves. As CEO, I am accountable."

The company said in a statement that Mason was asked to step down.

Co-founder Eric Lefkofsky and board member Ted Leonsis will lead the company in the interim, until a permanent CEO is found.

The company plans to hire a recruiting firm for the CEO search, a spokesman said.

The Groupon board met on Thursday and decided to replace Mason. No Groupon board members will be considered as CEO candidates, according to a person familiar with the board's deliberations.

Newly hired chief operating officer Kal Raman - brought onboard to turn around the international operations - is a possible candidate. However, the company is likely to favor an outside candidate who has e-commerce and global experience, said the person, who is familiar with Groupon's strategic thinking.

"We all know our operational and financial performance has eroded the confidence of many of our supporters, both inside and outside of the company. Now our task at hand is to win back their support," according to a letter from Lefkofsky and Leonsis.

Groupon, once hailed on magazine covers as the fastest-growing startup in history, rose to prominence in 2010 as the desire for daily deals - sharply discounted online coupons for everything from neighborhood car washes to spa treatments - peaked.

The company, which Mason once joked he founded to get then-partner Lefkofsky "off his back", in late 2011 joined a number of consumer Internet startups to go public at multibillion dollar valuations.

But shortly after, demand for daily deals began to evaporate. Groupon's costly international expansion, particularly into economically troubled Europe, began to erode growth and margins. And Wall Street quickly soured on the company, wiping out a lot of its market value.

"Groupon is a very large, very complex multifaceted global business. It's got ambitions in a lot of different areas and categories," said Macquarie Research analyst Tom White. "They are either going to have to find somebody who is a proven executer in handling complex businesses, or maybe this is a signal they are going to simplify."

The company's stock closed 24 percent lower on Thursday after the daily deals company posted a surprise quarterly loss on Wednesday, partly because it took a smaller cut of revenue from merchants offering holiday season discounts.

"The next person who comes in will have tough road ahead. The new CEO will have to be somebody with a strong stomach," said Dan Niles, chief investment officer at AlphaOne Capital.

"It's a lot like J.C. Penney. Changing the CEO is not going to change the fundamental tough aspects of the business. J.C. Penney stock did great when they replaced the CEO, and look what has happened since then."

Groupon shares rose as much as 8 percent in after-hours trade, from a close of $4.53 on the Nasdaq. However, later in the evening session the stock was up 4.2 percent at $4.72.

It has lost three quarters of its value since its November 2011 initial public offering at $20.