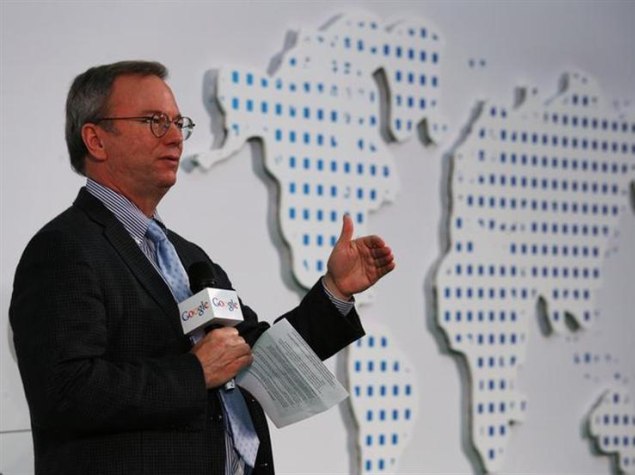 "It's really outrageous that the NSA was looking between the Google data centers, if that's true," Schmidt said in an interview.

"The steps that the organization was willing to do without good judgment to pursue its mission and potentially violate people's privacy, it's not OK."

According to a Washington Post report on Wednesday, the NSA had tapped directly into communications links used by Google and Yahoo Inc to move huge amounts of email and other user information among overseas data centers.

Responding to the report, the NSA said the suggestion that it relied on a presidential order on foreign intelligence- gathering to skirt domestic restrictions imposed by the Foreign Intelligence Surveillance Act and other laws "is not true."

"I can tell you factually we do not have access to Google servers, Yahoo servers," NSA Director General Keith Alexander said at a conference last week. "We go through a court order."

When contacted by the WSJ, the NSA referred to its previous statements that press articles about the NSA's collection had misstated facts and mischaracterized the NSA's activities.

Schmidt said in the interview that the NSA allegedly collected the phone records of 320 million people in order to identify roughly 300 people who might be at risk.

"It's just bad public policy and perhaps illegal," he told the paper.

The U.S. Senate Intelligence Committee approved legislation on Thursday that would tighten controls on the government's sweeping electronic eavesdropping programs but allow them to continue.