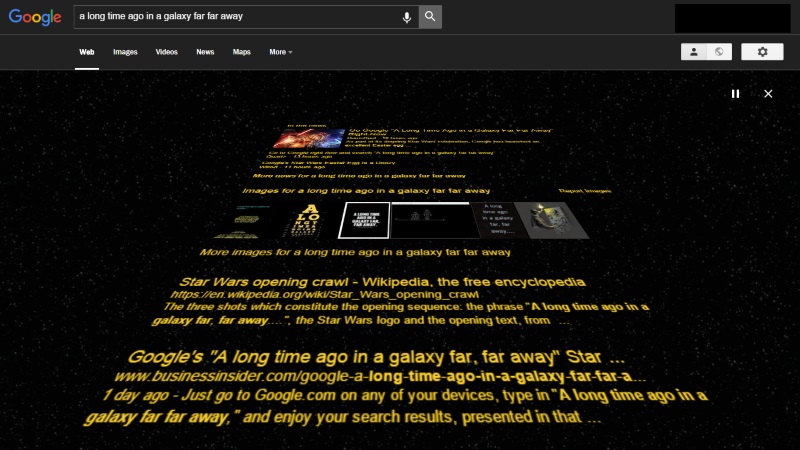 While many people are counting down to this week's holiday (or maybe to Black Friday), there's a whole fandom out there that is probably most interested in what's happening December 18: the premiere of the new "Star Wars" movie.

"The Force Awakens" is only going to have one opening weekend, after all. Thanksgiving, shmanksgiving.

Google's really gotten into the "Star Wars" spirit with a few Easter eggs throughout its products. The company is known for inserting little in-jokes into its search results, and a new one lets you feel as if you're already watching the start of a new movie. Search for "A long time ago in a galaxy far, far away" and you'll get results displayed in the signature "Star Wars" opening scroll.

That makes things a little difficult to click on, but luckily you can pause the results. (You can also glory in the "Star Wars" theme as it scrolls, though Google has kindly muted that by default.)

As my Post colleague Michael Cavna wrote, Google's also letting users choose which side of the Force, light or dark, they want to represent - a decision that then gets translated into the layouts and style of several of Google's key products, including Chrome, YouTube, Gmail and Google Calendar. For example, the pegman marker in Google Maps transforms into an X-Wing pilot or a Stormtrooper. Choosing between light and dark also creates a profile picture with a side-appropriate theme that you can share on social media.

According to a tracker on Google's "Star Wars" page, its users appear to be stronger with the dark side of the Force, though by a fairly thin margin.

Before you jump into the fray yourself, though, there is one thing you should know: There have been some complaints that signing up to get "Star Wars"-themed designs on Google products also put events on users' calendars without their knowledge. Google does say on its frequently-asked-questions page that "Star Wars events are automatically added to your calendar so you can keep up with the big events." And, the company adds, those events may be visible to everyone if you have your calendar settings set to public.

While it's true that people using a light- or dark-side-themed profile pictures probably aren't going to be shy about sharing their "Star Wars" enthusiasm, it's still something to think about before you declare your allegiances.