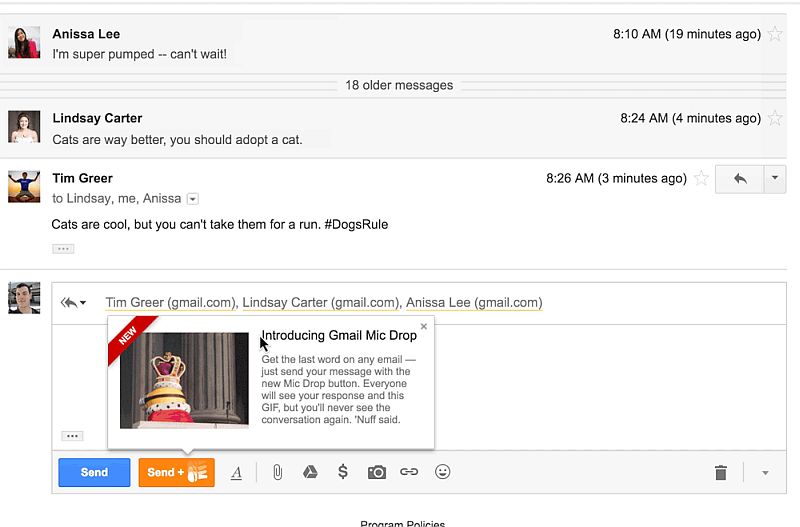 Google, following its long tradition of April Fools' Day jokes, introduced a new prank in Gmail on Friday. Things however didn't work out the way Google had intended, and the prank finally was pulled amidst uproar.

Google introduced a new feature in Gmail dubbed Mic Drop that allowed users to reply to any email with a new 'Send + Mic Drop' button - which replaced the commonly used Send + Archive button. On choosing the drop the mic feature in Gmail, the email included a gif image of a minion character popularised by the movie Despicable Me (and its subsequent releases) as "an explanatory image."

In a blog post, Google acknowledged the issue and said, "Well, it looks like we pranked ourselves this year." Google added that the feature was hit by a bug that saw Mic Drop feature inadvertently causing "more headaches than laughs."

"We're truly sorry. The feature has been turned off. If you are still seeing it, please reload your Gmail page," said Google.

Some users reported displeasure with Gmail's April fool feature as it got them in a tight position. One of the users on Gmail's Help Forum said, "Thanks to Mic Drop I just lost my job."

Another user wanted Google's help in undoing the feature. "This sounds like such a joke, but unfortunately it is not. I sent out an important email to 30 recipients and I inadvertently clicked the "Mic Drop" Send. I completely did not mean to [..] Is there any way I can un-do my mic drop feature?" wrote a Gmail user on the forum thread.

A worst-case scenario was simulated in a few mock-ups by Andy Baio on Twitter (via The Verge) who showed a mail chain being ruined by Gmail's April fool's day prank, and a funeral home being inappropriate.

Google has in the past years had some great fun with its April fool's day pranks but this was the first time that the company got itself criticised for such an attempt.