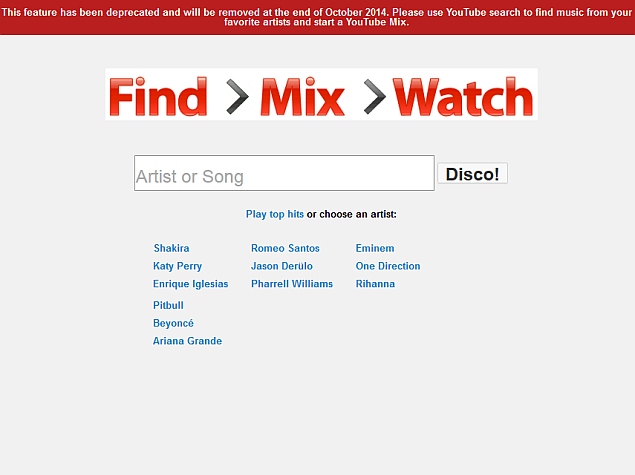 Google's music discovery service, YouTube Disco, which was first introduced in 2010, will be shutting down by the end of this month.

On opening the website, a disclaimer on top states, "This feature has been deprecated and will be removed at the end of October 2014. Please use YouTube search to find music from your favorite artists and start a YouTube Mix."

The service was aimed at showing users a variety of audio tracks from the artist searched for on the page's search bar. Users could also search for songs, and see other songs by the same artist. The YouTube Disco service would then also show users the related audio tracks or select mixes of related music or related artists. It also let users play 'top hits'.

The YouTube Disco music discovery service now leads the users to the artist's channel whether the users search for an artist or a song. However, related artists and audio tracks can be still be seen below. Notably, a similar functionality is available via the recently-introduced YouTube Mix feature, which appears as an option after the user searches for an artist or a song.

Google last month shut down its once-popular social networking website, Orkut. The URL www.orkut.com now redirects to Google's home page. The search engine's first foray into social networking was with the introduction of Orkut more than 10 years ago.

In June, Google also discontinued its Quickoffice application as the company merged its features into Google Drive and in the recently-introduced document editing apps - Google Docs, Sheets, and Slides. Notably, existing users will have the Quickoffice app in their phone's app drawer, but will receive no further updates.

Earlier this year, the firm shut down its goal-sharing service, Google Schemer. The service was launched in beta over two years ago, at the end of 2011.

JBL Collaborates With OnePlus on E1+ Earphones for OnePlus One
Google Play Services Updated; Nearby Players Feature Reportedly Rolling Out